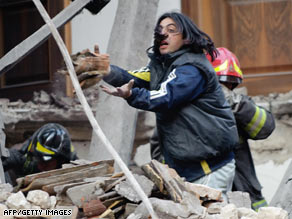 Rescue workers search for survivors in the ruins of a collapsed house in L'Aquila, Italy, early Monday.

The quake destroyed many buildings, including older structures. Rescue operations were under way, with an unknown number of people trapped in rubble.

The earthquake struck at 3:32 a.m. (1:32 a.m. GMT Sunday) about 95 kilometers (60 miles) northeast of Rome. Damage was concentrated about 120 miles from the city of L'Aquila. Frightened residents awakened from sleep and rushed into streets.

Tens of thousands of people were out in the streets, according to the mayor of L'Aquila. Part of the region is without electricity, and crews were checking for gas leaks.

The 6.3-magnitude earthquake followed less than six hours after another quake hit the northern part of the country, the U.S. Geological Survey reported.

L'Aquila, located in central Italy, is the capital of the Abruzzo region. Earthquakes are common in the region.

Monday's earthquake was about 10 kilometers (6.2 miles) deep, according to the USGS.

CNN's Hada Messia in Rome contributed to this report