PRAGUE, Czech Republic (CNN) -- President Obama urged nations Sunday to get rid of nuclear weapons, saying that the U.S. is committed to reducing nuclear stocks within the next four years. 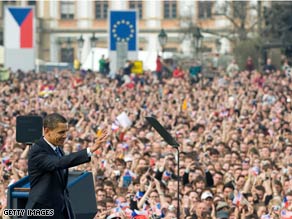 President Barack Obama faces a large crowd Sunday near the Prague Castle in the Czech Republic.

"Nuclear weapons are the most dangerous legacies of the Cold War," Obama said in a speech in front of a huge crowd outside the medieval Prague Castle in the Czech Republic. "The U.S. will take concrete steps. ... We will begin the work of reducing our arsenals and stockpiles."

The president, who was on an eight-day visit to Europe, warned that if some nations defy orders to get rid of nuclear weapons, America will maintain a safe and secure nuclear capability "to deter our adversaries and reassure our allies."

Obama said that the United States will need help to reach its goal, adding that talks are under way with his Russian counterpart.

"President [Dmitry] Medvedev and I began this process in London, and we will seek to include all nuclear weapon states in this endeavor."

Obama added, "To enhance our security and to demonstrate U.S. commitment to the Nuclear Non-Proliferation Treaty, we will negotiate a new Strategic Arms Reduction Treaty with Russia by the end of the year."

The president said that the solutions will include preventing the production of more nuclear weapons, negotiating a new international treaty and strengthening the Nuclear Non-Proliferation Treaty.

He warned that countries that break the rules will face immediate consequences, including automatic referral to the U.N. Security Council.

"Some argue that the spread of these weapons cannot be stopped," Obama said. "Such fatalism is a deadly adversary. If we believe that, then we are admitting that the use of nuclear weapons is inevitable."

Obama's speech came on the same day that North Korea launched a long-range rocket, which was widely condemned by U.S. and international officials, including U.N. Secretary-General Ban Ki-moon.

"Given the volatility in the region as well as a stalemate in interaction among the concerned parties such a launch is not conducive to efforts to promote dialogue, regional peace and stability," Ban said through a spokesman.

Obama said North Korea's launch emphasizes the urgency of the denuclearization agenda and also warned Iran that it had a choice on its nuclear ambitions.

"We will present a clear choice to Iran to take its rightful place in the community of nations, including its right to peaceful nuclear energy,or continue to refuse to meet its international obligations," he said.

The president pledged to work with partners for the "denuclearization of North Korea through the six-party" process.

"We believe in dialogue," Obama said.