STRASBOURG, France (CNN) -- President Obama hailed the NATO summit in Europe on Saturday, calling the meeting "very productive" and praising the alliance's commitment to the fight in Afghanistan. 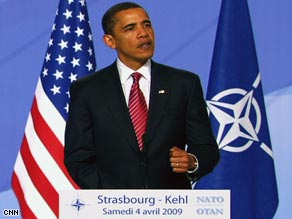 President Obama, speaking Saturday at the end of the NATO summit, said it was successful.

"Today I'm confident that we took a substantial step forward to renewing our alliance to meet the challenges of our time," said Obama.

Speaking to reporters as demonstrators protested against more involvement in Afghanistan, Obama said he was "pleased NATO allies pledged their strong and unanimous support" for America's new strategy in Afghanistan -- which calls for more troops, trainers and civilian workers.

He said America's NATO allies and partners have agreed to supply more combat troops to help shore up security during Afghan elections later this year.

More trainers have also been pledged for the police and army, and an expansion of a trust fund to help sustain Afghan security forces is in the works. Obama talked about achieving an increase in non-military assistance, such as doctors, engineers, educators and agricultural specialists.

This is apart from the 17,000 more combat troops and 4,000 trainers Obama recently committed.

Watch how Obama is engaging allies »

Obama had been pushing for more NATO troops in Afghanistan, and he was asked whether he thought he got enough combat troops.

"This was not a pledging conference, and yet, we already received the kinds of commitments that historically you don't see at a conference like this," he said.

"This was at a summit that was designed to discuss strategy as opposed to attract pledges, and I think it's an indication of the fact that this alliance is committed to achieving the focused goals that we have set out in Afghanistan."

Along with the focus on the ground in Afghanistan, Obama said the United States and his allies want to help strengthen Pakistan's ability to fight al Qaeda and "deliver goods and services and a better life for its people."

"I should add that not only were they gracious hosts, but the commitment that they made with respect to Afghanistan, indicate the seriousness of purpose with which they are approaching the NATO challenge and our mission in Afghanistan in particular," Obama said.

Also at the end of the summit, it was announced that Danish Prime Minister Anders Fogh Rasmussen had been named the alliance's new secretary-general. The decision was unanimous.

Earlier in the day, the NATO leaders held symbolic ceremonies to mark France's return as a full NATO member and to remember those who have died in NATO-led missions during the alliance's 60-year history.

The leaders gathered on a footbridge over the Rhine River separating France and Germany.

Merkel and the other leaders walked to the middle from the German side of the bridge. There they met French President Sarkozy and all shook hands, symbolizing France's re-entry in NATO's military command more than four decades after it left.

The group then walked onto the French side of the bridge for a solemn ceremony to honor the men and women in uniform who have died in NATO missions and operations over the years.

Surrounded by the flags of all 28 NATO member states, a lone military bugler played a tune before the place fell silent in memory of the fallen.

The NATO alliance has grown at the summit to include two new members, Albania and Croatia. Obama noted that both have contributed troops to the Afghan mission.

Noting that Saturday marked NATO's 60th birthday, Obama said, "It's a measure of our vitality that we are still welcoming new members."

Saturday morning's ceremony over the Rhine was briefly delayed because Italian Prime Minister Silvio Berlusconi was deep in conversation on his mobile phone. The other NATO leaders eventually went on without him, and he was absent for both ceremonies.

Berlusconi rejoined them in time for a group photo after the moment of silence.

After the conclusion of the summit Saturday, Obama plans to head to Prague, in the Czech Republic, the current president of the European Union.

In Prague, Obama plans to make a speech on proliferation and ridding the world of nuclear weapons. As many as 30,000 people were expected to turn out for the speech, the first major foreign policy address of Obama's presidency.

All About NATO • France