LONDON, England (CNN) -- Scattered demonstrations were taking place around East London as the G-20 summit got under way Thursday, but they were far smaller than the protests seen a day earlier. 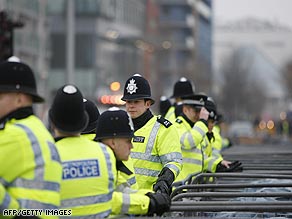 Police officers stand near barriers outside the ExCel Center in London's docklands.

A total of 32 people had been arrested by the early afternoon, police said. By contrast, 86 people were arrested in protests on Wednesday, when demonstrators swarmed the area outside the Bank of England and broke the windows of a Royal Bank of Scotland bank branch.

Demonstrations began Thursday in Strasbourg, France, where many of the G-20 leaders will attend a NATO summit marking the organization's 60th anniversary on Friday.

Strasbourg police estimated that 500 to 600 demonstrators participated in a spontaneous march in an effort to get into the city center, but did not reach it.

One man collapsed and died Wednesday in the area around the RBS bank, police said. The authorities said Ian Tomlinson, 47, was on his way home from work at a newsagent's when he died. A post mortem was planned for Thursday afternoon to establish cause of death.

Protest groups were holding a "solidarity demonstration" near the Bank of England on Thursday in response to the man's death. One of the organizers of Wednesday's protest, a group calling itself G20 Meltdown, wrote on Twitter that "hundreds" turned out and were chanting "Shame on you" at police.

They are demanding a police inquest into the man's death. However, the City of London Police said in a statement that the matter had been referred to the Independent Police Complaints Commission (IPCC).

"The police detained people here for a very long time yesterday, under very unsafe conditions," protester Marina Pepper told Sky News. "We believe the police have a responsibility to the people they detain to provide proper health care. ... We want to find out if he was looked after properly, and we're not being provided that information."

Some 4,700 officers were on duty Thursday -- 300 less than Wednesday, the Metropolitan Police said.

Watch more about the protests »

"There will be a complex operation in place but all our plans will facilitate lawful protest," the police said in a statement.

Elsewhere Thursday, acting on information about wanted people, police went to two London addresses they believe are being used as squats by some of the people involved in Wednesday's protests.

"The Met will continue to investigate those who may be outstanding from the violence and disorder yesterday," police said in a statement.

A spokesman had no information on the charges they faced.

As G-20 leaders gathered for the summit inside the ExCeL convention center, about 200 protesters gathered as close to the venue as the huge security screen would allow. Some were anti-war protesters from the Stop the War coalition and the British Muslim Initiative, and others represented the Ogaden people of Ethiopia.

The Ogaden nationalists were demonstrating against Ethiopian Prime Minister Meles Zenawi, who is attending the summit.

Police officers were manning barriers and checkpoints around the summit venue and turning back anyone without accreditation within a half-mile radius.