LONDON, England (CNN) -- Thousands of people have converged in the center of London for the first major protest ahead of next week's G-20 summit. 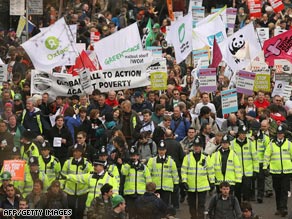 Up to 20,000 people are expected to join Saturday's protests in London.

Despite fears of violence in coming days that have prompted a major security operation in the British capital, Saturday's demonstration has so far been peaceful.

As many as 20,000 people were expected at the Put People First march, organized by trade unions but backed by some 120 other groups including environmentalists, church groups, and political campaigners.

Authorities are bracing for possible violence as anti-capitalist and environmental protesters to converge on the Bank of England next Wednesday -- April 1 -- for a "mass street party" dubbed "Financial Fools Day."

Protesters gathering on Saturday were calling for jobs, fair distribution of wealth, and a low-carbon future.

They carried banners and posters reading "Climate Emergency," "Gaza: End the Blockade," "Planet Before Profit," "We Won't Pay for Their Crisis," and "Jobs not Bombs."

Some groups turned out to march in bright-colored rain ponchos or hard hats.

The day began with a church service in central London. The Salvation Army, which helped organize the service, said it was a "perfect opportunity to ask the G-20 to consider the world's most vulnerable people."

Those at the service sang "We are blessed to bless a world in pieces." They asked for freedom from debt and justice to profit, the Salvation Army said.

After gathering along the Thames River and marching along its banks, marchers moved past Trafalgar Square to Hyde Park for a mass rally in the afternoon. Speakers at the rally include trade union bosses, environmentalists, and global justice campaigners, along with musicians and a comedian, according to march organizers.

Jake Corn, from Cambridge, told the UK's Press Association he was taking part to show support for a more sustainable future.

"We feel this is an important moment with the G-20 coming here," Corn said.

"We want to get our message across to as many people as possible."

Italian trade unionist Nicoli Nicolosi told PA he had travelled from Rome to take part. He said: "We are here to try and make a better world and protest against the G-20."

The G-20 summit next Thursday brings together leaders and financial chiefs from the top 20 industrialized and emerging economies, along with leaders from non-G-20 nations.

Hundreds of other officials will also be there, including the heads of the International Monetary Fund and the World Bank.