By Metsa Rahimi
For CNN 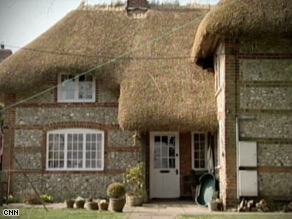 The current owner has ensured that houses are not sold off in the near future.

It's all one could ever want from a quintessential English village, and now it is on sale for $33 million.

Once owned by English cricketer Herbert Blagrave, the estate was left to his own charitable trust which has now put the entire village -- church not included -- up for sale. "That," joked local estate agent Tim Sherston, "is owned by God."

In times of financial downturn and falling house prices, the decision to sell up is curious. The trust says though it wants to free up the capital tied up in the estate so it can give more to charity on an annual basis.

Sherston maintains that Linkenholt is not only a rare opportunity; it is a sound buy. "Big time investors will look upon it as a safe haven to place their money because in five years you're going to see a great deal of appreciation here, so this is perfect." The new owner could also take away a significant income from the rent of the houses.

Watch as village goes on sale »

Likely buyers are private individuals interested either in farming or the shoot, regarded as one of the finest in the south of England, according to Sherston. There has also been some foreign interest though he adds "the village is run very much as it has been for the last 200 to 300 years and it is the trustees' hope that the new owner will continue to run it in the same manner."

Provisions have been made by the trust to ensure the houses are not sold off in the near future. Only the manor house will be vacant for the new owner.

But locals do worry about their new landlord. The village thatcher Paul Raynsford told CNN: "I'd sooner not see a banker or someone who's going to asset strip it. I'd like to see a film star, pop star, footballer, someone who just wants to buy it so they can say 'I'm the lord of the manor.'"

Ray Smith, known locally as "the Sheriff," has worked as the estate's manager for 50 years. He says: "I'd like to see an Englishman live in the manor, run the farm and the shoot like it used to be."

Indeed, Linkenholt is idyllic; within the beautiful surroundings classified as an area of outstanding beauty, this is a village full of characters and local tales.

Ray's wife Elsie talks of how they met as teenagers cycling past each other everyday on the way to work along the same path. Stopping one day to help with her broken bike, they have been together ever since. He made the permanent move to Linkenholt when the keeper before him caused a local scandal when caught illegally shooting the ground's deer.

Two doors down lives Elsie's sister, who is married to Ray's brother. The sisters were born here, christened and later married in the church here, worked in the cricket club, and though their own children have moved further afield, they would never leave. Their father even died on Linkenholt's cricket ground during a game in the 1930s.

Having dedicated their lives to the village, the Smiths and childhood friend Alan Dewey, another original local, were given the houses in which they live by the trust. Ray adds: "I'm on holiday all the time. With a place like this to sit in the sun and look at all the views, I don't think you'd want to go anywhere else."

Though the media has shone a temporary light on Linkenholt, the hope after the arrival of the new owner is that the village will revert back to times of old, unspoilt and wonderfully English.

Reiterating the ideal of having a new lord of the manor, blacksmith Colin Boast adds: "We would like to see someone come in and take the village to their heart and to love it like the people here do."