LONDON, England (CNN) -- London police said Thursday they are planning one of the largest and most complex operations in their history as the city gears up to host the G-20 summit next week. 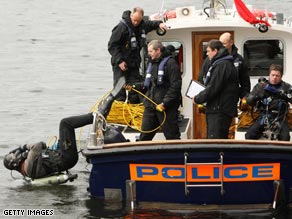 Police divers carry out security checks near the site of next week's G-20 summit in London.

Police forces from surrounding counties like Essex and Sussex are also assisting with security, he said.

Officers will be protecting the summit venue, delegates, their hotels, their official engagements, as well as monitoring protests around the capital, O'Brien said.

The Met Police has canceled all staff leave for April 1 and 2. The summit takes place April 2.

O'Brien would not say how many police officers would be on duty, but he said there were 10,500 police shifts being scheduled between March 24 and April 2.

The G-20 summit brings together heads of state and financial leaders from the top 20 industrialized and emerging economies. Leaders from non-G-20 nations will also be represented, along with hundreds of other officials including the heads of the International Monetary Fund and the World Bank.

The one-day summit is already attracting a "significant amount of interest" from protest groups, O'Brien said. "Old faces on the protest circuit" have started to reappear ahead of the event, he said, although he gave no names.

"Some see the G-20 as an opportunity to galvanize support" for their various other causes, he said.

The first big protest is expected to take place Saturday in Central London. Police expect some 20,000 people to turn out, O'Brien said.

Though organized by trade unions, some 120 different groups are taking part in the "Put People First" march, which will start at Victoria Station, wind through Trafalgar Square, and end in a demonstration at Hyde Park.

Heavy rain is predicted for Saturday.

April 1, the day before the summit, will see various smaller demonstrations in central London. Protesters are calling it "Financial Fools Day," a play on April Fools Day and the anger surrounding the current economic crisis.

An "Alternative G-20 Summit" will also taking place near the summit venue, the ExCeL convention center in east London.

Police have been developing intelligence about all the demonstrations and a policing plan for each one, O'Brien said.

There will be no special laws under which officers can arrest protesters who break the law, he said, and counter-terrorism measures will only be used when they apply.

Asked about reports that some protesters may be planning violence similar to the recent riots in Greece, O'Brien said simply that police have "well-rehearsed tactics" and an experienced team on hand to deal with it.

"We will not tolerate any people breaking the law, attacking buildings, people, or our officers," he said.

There have also been reports that protesters may be planning to storm important buildings like the Bank of England. O'Brien said only that police were prepared for a "range of instances."

The ExCeL venue is in East London, 10 minutes from the financial district of Canary Wharf, and there are concerns that protesters angry about the economy could target workers in the area.

The London Chamber of Commerce said many firms are advising their staff to take precautionary measures, including wearing more casual clothing, hiding any company logos, canceling unnecessary meetings, and keeping movement in and out of the building to a minimum.

"The vast majority of firms will have robust security arrangements in place," said the Chamber's chief executive, Colin Stanbridge. "Canceling unnecessary meetings may have to be considered, but people shouldn't feel as though they can't travel in London to conduct important business."

UBS, which has offices in the financial district, would not confirm any specific measures but said the company was prepared.

"We are aware of the situation and we'll have appropriate security measures in place," a company spokeswoman told CNN.

O'Brien called the precautionary measures "common sense" but said police would work to ensure that companies face no disruption next week.

"This is a very complex operation with some really experienced public order commanders," he said. "We're up for it and we're up to it."