LONDON, England (CNN) -- Four British Coastguard helicopters of the same model as the one that crashed off Canada last week have been grounded in Scotland to replace a gearbox mounting part, and all those models worldwide are expected to be grounded as well. 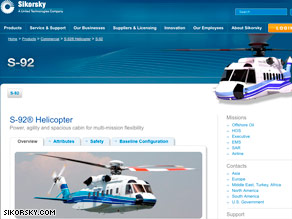 Sikorsky's Web site says the S-92 "is the most advanced aircraft" in its civil product line.

This move comes after the Transportation Safety Board of Canada indicated on Friday that the components must be replaced on Sikorsky-92 A helicopters across the globe.

The Canadian agency said the U.S. Federal Aviation Administration will issue an emergency airworthiness directive, effectively grounding all Sikorsky S-92 A helicopters worldwide until the parts are replaced.

On March 12, 17 people died when a Sikorsky S-92 A operated by Cougar Helicopters crashed or ditched in the Atlantic Ocean off the coast of Newfoundland. One person survived.

Canada's transportation board on Friday said investigators found a broken main gearbox component that had been addressed in a January alert from Sikorsky.

Sikorsky's alert, on January 28, said the "main gearbox filter bowl assembly mounting titanium studs should be replaced with steel mounting studs." This "one-time modification" was to be done within 1,250 flight hours or within a year of the alert's issue date.

According to Britain's Maritime and Coastguard Agency, Sikorsky on Friday notified helicopter contractor CHC that aircraft operating out of Stornoway and Shetland in Scotland need the "urgent modification."

The British agency said that when it is clear how long the helicopters will be grounded or need to undergo engineering work, the agency "will take a decision on implementing a contingency plan for longer term air coverage. The aircraft on the south coast are unaffected."

All About Canada • Newfoundland and Labrador • Maritime and Coastguard Agency