ST. POELTEN, Austria (CNN) -- The daughter of Josef Fritzl, the Austrian man accused of keeping her in a cellar for decades and fathering her seven children, testified against him by video at his trial Tuesday. 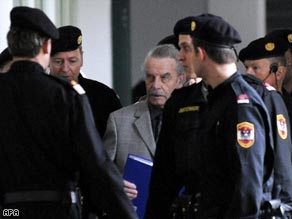 Josef Fritzl is seen without his face covered and surrounded by security guards Tuesday.

One of Elisabeth Fritzl's brothers, Harald, also testified by video, a court spokesman said. The media and public have been barred from the courtroom for sensitive parts of the trial.

Fritzl has pleaded guilty to incest and other charges, but denied murder and enslavement.

He pleaded "partly guilty" -- an option in Austrian court -- to multiple charges of raping his daughter, Franz Cutka, a spokesman for the court in Landesgericht St. Poelten, said. A verdict is expected on Thursday, Cutka said.

Elisabeth testified on an 11-hour videotape. Portions of the tape were played Monday, and Fritzl was asked about it. The remainder of the tape was played Tuesday, officials said.

Watch his face in the courtroom »

Authorities have said Elisabeth and her children were given new identities and are in a secret location.

Details of her testimony were not made clear at the daily afternoon news conference.

Asked at the news conference why other family members have not testified, officials said they did not wish to do so.

A neo-natal expert gave evidence Tuesday in relation to the murder charge.

As he had Monday when the trial opened, Fritzl concealed his face behind a file binder as he arrived in court to shield himself from reporters, television cameras and photographers and escorted by a phalanx of police officers.

Later Tuesday he dropped his guard and was pictured with the binder by his side, talking to security guards.

During the trial, prosecutors have painted a chilling picture of the more than two decades Elisabeth spent in the cellar of the family home in Amstetten with three of her children.

Fritzl took three other children upstairs, authorities have said, telling his wife and other relatives that the missing Elisabeth had dropped them at the house.

The woman and the remaining children never saw daylight, prosecutors said, and Fritzl went away for long periods of time, causing them to go hungry when he did not bring them food.

To punish them, prosecutors said, Fritzl sometimes turned the power off in the cellar for up to 10 days. In addition, they alleged, Elisabeth was often sexually assaulted in front of the children.

The case first came to light in April 2008 when Elisabeth's then-19-year-old daughter, Kerstin, became seriously ill with convulsions, and Elisabeth persuaded her father to allow the girl to be taken to a hospital.

Hospital staff became suspicious and alerted police, who discovered the family members in the cellar.

Police said Fritzl confessed to them that he had sex with his daughter, kept her and their children in captivity, and burned the body of the infant in an oven in the house. Elisabeth told police the infant was one of twins, and died a few days after birth.

When Elisabeth gained her freedom, she told police her father began sexually abusing her at age 11. Seven years later, she said, he drugged, handcuffed and locked her in the cellar.

To back up his story that she had run away, Fritzl forced Elisabeth to write letters, authorities have said.

Defense attorney Rudolph Mayer has said his client, 73, expects to spend the rest of his life in prison.

CNN's Diana Magnay and Frederik Pleitgen in St. Poelten and Melissa Gray in London contributed to this report