French Vogue to tighten its belt

PARIS, France (CNN) -- No one was expecting it, but there it was. The "f" word so rarely uttered in the world of high fashion had just slipped through the lips of one of the world's most stylish women. 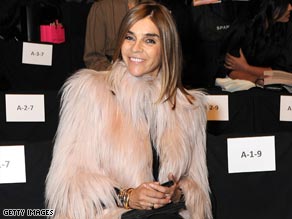 "I think we need to become more frugal," says Carine Roitfeld, editor in chief of Vogue Paris. "Not on quality," she hastens to add, "just on organization."

The fashionista's favorite fashion editor is sitting on a leather chair in her sparse white office. The shelves are all but empty. There's no in-tray on her desk and certainly no computer. "They're not my specialty," she shrugs.

An orange blossom candle twinkles in its glass casing and pictures stand -- some still in their wrapping -- against the wall.

She's been in this office for eight years but it looks like she moved in last week. She hasn't even had time to hang her pictures, and it's not hard to see why.

Every month, Roitfeld and her small team pull together what is considered to be the world's most fashion-forward magazine.

Vogue Paris may have a fraction of the circulation of its American stable mate -- 139,000 versus 1.3 million -- but what it lacks in numbers it makes up in prestige.

Still, Roitfeld recognizes that even the upper end of the magazine market is not immune to the deepest global recession in decades.

She's prepared to make cuts. And rather than begrudgingly canceling a coffee order or two, she's almost relishing a return to the pre-boom days when challenges were overcome with creativity rather than cash.

"It's become ridiculous," she tells CNN, explaining that where once eight people may have gathered around a table to discuss a photo shoot, now there are 25.

"Some things got too far away. There were people who were flying private jets -- we need to go back to reality.

"When it's more difficult you have to be more creative."

CNN's Revealed joined Roitfeld and five members of her team as they gathered round a glass table to choose the cover of the April edition of French Vogue.

It doesn't happen often -- usually the cover is a fait accompli -- but this time U.S. actress Scarlett Johansson has confused the issue by unexpectedly dying her hair.

"This cover, it was very difficult," Carine explains, "because we want people to recognize Scarlett and then she changed her hair color."

Three mock-ups lie on the table; different fonts, colors and wording cover Johansson's lascivious poses. It's clear which one Carine prefers and, rather predictably, it's her choice that will hit news stands this week.

"I think this is a Vogue image and I want to stick to being Vogue," she says of her decision. "The cover is like the publicity for your magazine. It's very important. We need the more appealing one, the more visible one."

Carine Roitfeld was a highly respected and well-connected fashion stylist with no experience in magazine editing when she took the job as editor-in-chief at Vogue Paris in early 2001.

She was already an old friend of renowned photographer Mario Testino; they met 25 years ago when both were yet to make their names. He's now Godfather to her two children, Vladimir and Julia, who are 28 and 27 respectively, and who both now live in New York.

Roitfeld and Testino later teamed up with U.S. designer Tom Ford during his first years as creative director at Gucci to reinvigorate the brand with an innovative advertising campaign.

Roitfeld was approached by Jonathan Newhouse, chairman of Conde Nast International to take the role at French Vogue.

During her time there, advertising revenue has increased almost 10 percent and circulation is up 27 percent. "It is probably a 'Carine effect'," concludes Xavier Romatet, the president of Conde Nast Publications, which owns Vogue magazine.

"Carine's probably the most creative person I've met in my life," he told CNN, describing her as a savvy business woman with a finely-tuned intuition as to what her readers want.

Roitfeld scoffs at suggestions that she has an acute business mind, saying, "I think I'm a terrible business woman."

Still, what she's doing at French Vogue is obviously working and despite persistent rumors that she may soon announce her departure, she insists she has no plans, as yet, to leave.

"I'm very happy here," she tells CNN before adding cryptically, "but I'm sure something new is going to happen in the next year."

Many in the industry have tipped Roitfeld to replace Anna Wintour in New York, should the esteemed editor of American Vogue choose to retire. Read more about Roitfeld's views on the New York job

Roitfeld says she hasn't been approached about the job, and if she were, she probably wouldn't take it.

"Of course you'd be proud to be offered a job at this Vogue, because it's the biggest Vogue.

"But I'm not sure I'd be happy to work at the biggest Vogue. It's too big; you have to talk to too many different people. I'm very happy at French Vogue to be able to do everything -- almost everything -- I want to do in the magazine.

"Anyway my husband doesn't want to go," she adds later with a smile.

Roitfeld is anxious not to feed any speculation of a competitive rift between her and Wintour, referring to her U.S. counterpart as the "First Lady" of fashion.

"Anna does a great job... I respect her a lot," Roitfeld says.