Sarkozy: France will return to NATO

(CNN) -- French President Nicolas Sarkozy Wednesday made one of the biggest foreign policy gestures of his tenure and announced that France is to return to NATO's high command. 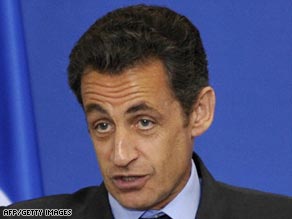 Sarkozy said that he wants France to rejoin the military alliance as a full member at its 60th anniversary summit next month.

"We have stop deluding ourselves that by burying our heads in the sand, we are capable of protecting anything."

Charles de Gaulle took France out of NATO more than 40 years ago in protest at U.S. domination.

In 1966, de Gaulle, then president, evicted all allied troops and bases from France in order to assert French sovereignty.

While Sarkozy's move notionally marks a huge change, in practicality it will make little noticeable difference.

In recent years France has become a large contributor to NATO missions despite not holding positions in its command.

The country is already the fourth largest contributor of troops to the alliance's missions. It took part in NATO-led action in Bosnia and Kosovo and has more than 3,300 troops in Afghanistan.

Sarkozy will want to win the support of the French parliament, which considers his proposal Tuesday.

Politicians on the left and in his own right-of-center UMP party have expressed dismay, but he is likely to survive any no-confidence votes over the issue.

Sarkozy has long argued that France would be better off having a say in the alliance's actions rather than committing resources without any influence.

According to recent media reports, France's full return will see it get two commands: the Allied Command Transformation project in Virginia, examining a more modern alliance, and the regional command headquarters in Lisbon, which is in charge of NATO's rapid response force.

A poll carried out for this week's edition of Paris Match weekly magazine revealed that 58 percent of French people are in favor of a full return to NATO.