LONDON, England (CNN) -- A habitually violent young man was convicted Wednesday of the murder of teenage actor Rob Knox, who had starred in the latest "Harry Potter" film. 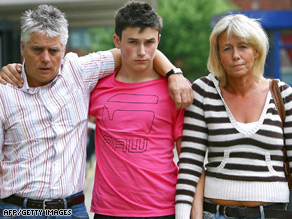 The father, brother and mother of Rob Knox pose together after the death of the young actor.

Karl Bishop, 22, attacked Knox and four friends with two kitchen knives outside a bar in Sidcup, south east London, last May. He stabbed them 10 times in less than two minutes, the Old Bailey court in central London heard.

Knox, 18, had rushed out of the bar after he heard that Bishop had threatened his younger brother Jamie but he ended up being stabbed five times, once in a main artery. He died in hospital later that night.

Bystanders said Bishop's face was "screwed up in rage" as he lashed out with the two knives, the Press Association reported.

Days before the attack, the actor had finished filming on "Harry Potter And The Half-Blood Prince," due for international release in July, in which he played the role of Marcus Belby. He was set to reprise the part in future "Harry Potter" films.

Knox's father Colin told mourners at his funeral, including co-star Rupert Grint, that his son had been "living the dream," PA said.

Prosecutor Brian Altman told the court that the young actor's promising life was ended by a "habitual knife carrier" who believed stabbing people was an "occupational hazard" and had previous convictions for knife crime.

Bishop is due to be sentenced on Thursday.

Knife crime in Britain is a political hot topic due to a spate of recent killings of mainly young people in major cities. UK Prime Minister Gordon Brown has urged tougher sentences for those caught carrying knives. He told the Daily Telegraph last month: "By carrying a knife you are not only endangering the lives of others, but you are more likely to be killed, or end up in jail.

"We need to change the way young people think about knives, we need families and communities working together ... to get this message across and help stamp out knife crime and get weapons off our streets."