(CNN) -- A children's show host who was born with one hand is facing criticism from parents over her disability. 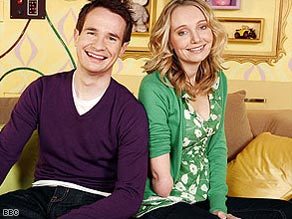 The BBC is receiving complaints about kids' show host Cerrie Burnell, who was born with one hand.

BBC spokeswoman Katya Mira said the corporation has received at least 25 "official" complaints recently about Cerrie Burnell, new host of two shows on the BBC-run CBeebies television network, which is aimed at children younger than 6.

The official complaints do not count the dozens of negative comments lodged in Internet chat rooms, Mira said.

In one chat room, a father lamented that Burnell being on the show forced him to have conversations with his child about disabilities.

However, there have also been messages of support for Burnell. What do you think about the complaints?

"We have also received 99 appreciations of her," Mira said.

Burnell started as a presenter of the shows in late January after acting with theater companies in Manchester, England, and Brazil.

A BBC news release in January introducing Burnell made no mention of her disability, but a publicity photo showed the right sleeve of her sweater pulled up, showing her arm stops just below her elbow.

The issue has spurred a debate in England among newspapers, columnists and bloggers.

Burnell said she has heard the criticism and will not let it bother her.

'It can only be a good thing that parents are using me as a chance to talk disability with their children. It just goes to show how important it is to have positive, disabled role models on CBeebies and television in general," Burnell said.

Michael Carrington, BBC controller of CBeebies, said the company is standing by Burnell.

"Cerrie is warm and natural and we think that, in time, all moms and dads and children will love her as much as we do," Carrington said.

All About British Broadcasting Corporation