(CNN) -- Former Serbian President Milan Milutinovic was Thursday found not guilty of war crimes and crimes against humanity in Kosovo by a U.N. tribunal. 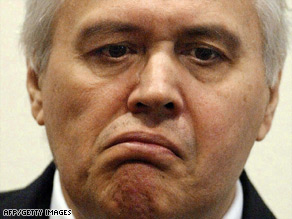 Milan Milutinovic had was cleared of war crimes in Kosovo.

Five other former high-ranking Serb officials -- Nikola Sainovic, Dragoljub Ojdanic, Nebojsa Pavkovic, Vladimir Lazarevic and Sreten Lukic -- were found guilty on all or some of the same charges.

The judgment was the first by The Hague, Netherlands-based tribunal for crimes by the former Yugoslav and Serbian forces during a military campaign against Kosovo's ethnic Albanians in 1999.

Their crimes took place during a Serb-led military campaign against Kosovo's ethnic Albanian population during the first six months of 1999 before a NATO bombing campaign forced a halt to the operation.

Sainovic, former Yugoslav deputy prime minister and Pavkovic, a former Yugoslav army general were each sentenced to 22 years in prison for crimes against humanity and war crimes.

Lazarevic, another ex-general and Ojdanic, who was chief of general staff, were each sentenced to 15 years on charges of forced deportation of Kosovo's ethnic Albanian population.

The International Criminal Tribunal for the former Yugoslavia had heard during the two year tribunal how military forces of the former Republic of Yugoslavia and Serbia waged a campaign of terror against Kosovo Albanians.

The court said Milutinovic didn't have "direct individual control" over the army and that "in practice" then-Yugoslav President Slobodan Milosevic "exercised actual command authority" over the army during the NATO campaign.

Milosevic eventually surrendered to Serbian authorities in 2001 and had been extradited to The Hague, where he was on trial between 2002 and 2006 for the alleged offences in Kosovo and for alleged crimes in Croatia and Bosnia and Herzegovina.

He died from natural causes in March 2006 before the trial ended and before a judgment was made. He was the first sitting head of state to be charged for war crimes when he was indicted in 1999.

Kosovo's government declared its independence from Serbia in February 2008 after being administered by the United Nations since 1999. The U.S., Britain and France have recognized Kosovo's independence, but China and Russia joined Serbia in opposing the move.