(CNN) -- The social networking site Twitter again stole a march on traditional media when it was the first outlet to publish dramatic pictures of the Turkish Airlines crash. 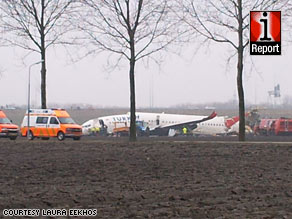 iReporter Laura Eekhos went to the crash site after hearing about it on TV. The area "was swarming with people from our town," she said.

"This is a story that broke on Twitter first and continued to unfold from there. Eyewitnesses were posting comments about the shock of seeing the plane 'dive' and amazement of passengers walking out of the wreckage," Barnett said.

"It was a dramatic image of a fractured plane posted on Twitter.com that was the first worldwide view of the Turkish Airlines crash." iReport: Send your videos, stories

Barnett said that when CNN saw the image it moved quickly to confirm with Dutch officials that a crash had happened.

"Within minutes we were reporting on the story.

"This proves that social networking sites can be a real asset in covering breaking news and gathering eyewitness accounts but the web should always be treated with extreme caution," Barnett said.

See where the plane crashed »

"We make a concerted effort to reach out to people posting on the Internet to verify what they say matches up with official accounts."