(CNN) -- Switzerland's part-time soldiers could lose their famous right to store their weapons at home. 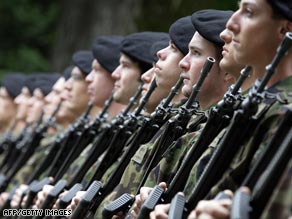 Switzerland's part-time soldiers could lose the right to store their weapons at home.

A coalition led by the country's Social Democrat party and the Greens has collected nearly 120,000 signatures to force a national referendum on whether the weapons should be stored at military bases.

The coalition of 74 groups says the weapons are involved in too many suicides and murders in the country and tighter controls are needed.

Service in the militia is compulsory for men aged between 19 and 31 and in between call-ups they store their weapons at home. There are currently around 220,000 conscripts.

However, a 2007 law change banned the storage of ammunition in homes. The coalition is looking to extend this, control the purchase of military weapons and set up a national gun register.

Lang said their presence "at the heart" of the population could not be justified.

He said a national register had to be created to keep track of the weapons, something police had long been seeking.

Lang said the weapons had to be "banished" from homes.

Barbara Weil, of the Swiss Medical Association, said it had been scientifically proven that if the guns were less freely available the number of suicides would drop.

The studies had also shown that other methods of suicide did not increase in countries who had brought in stricter gun controls.

The coalition estimates that 300 deaths annually are connected to gun use.