French battleship intact after nearly a century under water

(CNN) -- A French battleship sunk by German torpedoes in 1917 is lying upright and almost intact at the bottom of the Mediterranean Sea, where it was found by an unmanned submarine surveying a proposed gas pipeline route between Italy and Algeria. 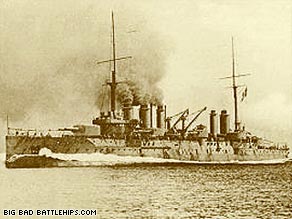 The Vergniaud is a French battleship of the same class as the Danton, which is on the floor of the Mediterranean.

Details of the Danton's discovery were released at a news conference Thursday in Milan, Italy, where the pipeline construction company, Galsi, is based.

The condition of the World War I-era ship is "extraordinarily good," said Robert Hawkins, a project director with Fugro, a geotechnical, survey and geosciences company based in the Netherlands.

"It is actually on the seabed in an upright position so you can see the superstructure," he told CNN from England. The discovery was unexpected and caused considerable excitement, he said.

Because Fugro was using an unmanned submarine to chart the seabed, it was not until later that its technicians realized they had found a large vessel.

"When we were processing the data, we discovered we had actually surveyed over this battleship," Hawkins said.

The ship was found in December 2007, according to documents provided by Galsi. In January 2008, Fugro collected enough data to determine it was the wreck of a battleship.

Subsequent discussions with the French Navy Commission confirmed the discovery was the Danton, which was built in Brest, France, in 1910. It was one of the largest French naval vessels of the era.

The Danton was carrying 946 officers and sailors and 155 passengers on March 18, 1917, when it received a warning that enemy submarines were in the area.

A lookout raised an alarm after seeing a wake in the water, but no vessel was seen before the Danton was hit by two torpedoes fired by the German submarine U-64. Most of those aboard were rescued, but 296 sailors -- including the captain -- went down with the ship.

After the torpedoes hit, the ship turned upside down, then rolled again before landing on the seabed, where it slid before coming to its final resting place, Hawkins said. Although the ship lost some of its superstructure, for the most part it is relatively intact, he added.

The French confirmed the identity of the Danton by comparing Fugro's data with design plans. Hawkins said he doubts the French will try to raise the ship because it lies nearly two-thirds of a mile (about 1,000 meters), under water.

The Danton, which was traveling between Toulon, France, and Corfu, Greece, came to rest about 22 miles southwest of the island of Sardinia.

The pipeline carrying natural gas from Algeria to Italy will be rerouted around the ship, the pipeline company said.

All About France • Italy • Germany