German bishops say 'no room' for Holocaust denier in Catholicism

(CNN) -- Germany's Catholic bishops are calling for the expulsion of a bishop, recently brought back into the church by Pope Benedict XVI, after new reports that Richard Williamson denies the Holocaust. 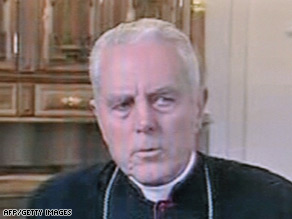 In statements to Spiegel Online, the Web site of the German news magazine, Archbishop Robert Zollitsch said the church should part ways with Bishop Williamson, a member of an ultra-conservative group that split off after Pope John Paul II excommunicated him and three other bishops in 1988.

"Mr. Williamson is impossible and irresponsible," Zollitsch, chairman of the German Bishops' Conference, told the magazine in an article published Saturday. "I now see no room for him in the Catholic Church."

The Vatican has faced criticism since Benedict lifted the excommunication of the four men January 21 and announced the move three days later. The announcement came days after a Swedish Public Television interview in which Williamson said Germany's systematic murder of millions of Jews during World War II never happened.

In the Saturday article, Spiegel quotes Williamson saying that he will not recant his theories and that he would need more evidence to believe the Holocaust really happened.

On Wednesday, the Vatican ordered Williamson to "distance himself" from his views "in an absolutely unequivocal and public manner."

The Vatican's secretary of state, Cardinal Tarcisio Bertone, has said Williamson will not be allowed to perform priestly functions if he does not recant. He said the pope was unaware of the comments when he rehabilitated the men.

Williamson apologized last week for the "distress" he has caused the pope but did not retract his comments.

Williamson, a Briton who now lives in Argentina, and three other bishops who belong to the Society of Saint Pius X were excommunicated by Pope John Paul II in 1988. The society was founded by Archbishop Marcel Lefebrve, who rebelled against the Vatican's modernizing reforms in the 1960s, and who consecrated the men in unsanctioned ceremonies.

The pope -- who was born in Germany and was a child during the Nazi era -- rejected Holocaust denial in public statements January 28.