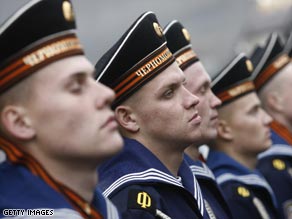 The decision came a day after reports that Kyrgyzstan is planning to close a strategically important U.S. military base that Washington uses to transport troops and supplies into Afghanistan.

On Wednesday, the Collective Security Treaty Organization -- made up of Russia, Armenia, Belarus, Kazakhstan, Kyrgyzstan, Uzbekistan and Tajikistan -- decided on the rapid-reaction force at a Kremlin summit, the Russian news agency RIA-Novosti reported.

"Everyone agreed that the formation of joint forces is necessary," he said.

Officials told Russian media that all the members had signed the agreement, though Uzbekistan submitted a special provision.

Uzbekistan doesn't mind contributing military units to the rapid-reaction force "but does not consider it necessary for the moment" to attach emergency responders, drug-control forces and other special services, organization spokesman Vitaly Strugovets told Interfax.

Russian media reported that the force will be used to fight military aggressors, conduct anti-terror operations, battle regional drug trafficking and respond to natural disasters. The force will be based in Russia under a single command, with member nations contributing military units.

On Tuesday, Kyrgyz President Kurmanbek Bakiyev announced at a Moscow news conference that "all due procedures" were being initiated to close Manas Air Base, RIA-Novosti reported. The announcement was made after news reports of a multimillion-dollar aid package from Russia to Kyrgyzstan.

Gen. David Petraeus, who oversees U.S. operations in the Middle East and Central Asia, including Afghanistan, was in Kyrgyzstan last month, partly to lobby the government to allow the United States to keep using the base. He said he and Kyrgyz leaders did not discuss "at all" the possible closure of the base and said local officials told him there was "no foundation" for news reports about the issue.

The relationship between the United States and Kyrgyzstan was damaged when a Kyrgyz citizen was killed by a U.S. airman in December 2006. The airman was transferred out of Kyrgyzstan, and the dead man's family was offered compensation. Petraeus said in January that the investigation was being reopened.

As he announced the base closure Tuesday, Bakiyev said he was not satisfied with the inquiry into the accident and his government's "inability to provide security to its citizens" was proving a serious concern.

Medvedev also weighed in on the issue Wednesday, saying the base closure shouldn't hamper anti-terrorism operations, according to Interfax.

"It would be great if their numbers meant there were fewer terrorists, but such action depends on other things as well," he said.

All About Russia • Kyrgyzstan • Uzbekistan