Iran: Ready to work with Obama 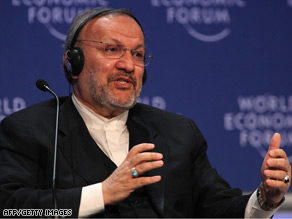 Speaking during a debate on the foreign policy challenges facing the new president, Mottaki said Americans had talked enough. "Now it is time for them to listen," he urged.

"I believe the president of the United States needs more time to express his ideals and objectives," Mottaki continued. "I believe the U.S. should see why it needs to change. These are strategic issues, not tactical measures.

"The U.S. needs to change because the world has changed drastically. Therefore a new framework should be realistic. President Obama has courage and he must tell us which aspects of the Bush administration he is against."

In an earlier session at the five-day meeting of political and business leaders, Mottaki said that the U.S. would find "a creative and cooperative reaction, including from Iran" if it changed its policies in the Middle East.

Panelists urged Obama to focus on the situation in the Middle East, the war in Afghanistan, the humanitarian crisis in Zimbabwe and nuclear proliferation.

Odinga welcomed the presidential election of the half-Kenyan Obama, saying "there is a lot of hope in the world right now."

"Kenyans, like the rest of the world, have been electrified by the campaign and election of President Obama," he said, calling on the new president to work with "progressive" African leaders.

"I belong to those who believe that Africa deserves better," Odinga said. "Because of poor leadership, Africa has not been able to claim its rightful place in the world."

French Foreign Minister Bernard Kouchner rejected suggestions his country was anti-American, claiming, "We were never against America. We just did not like certain American policies."

He said Europe was ready to build a new partnership with the U.S. towards solving global problems. He described Obama as a "man of conviction" who had "opened hearts and minds."

Afghan Defense Minister Abdul Rahim Wardak called on Obama to make his conflict-stricken country a "focal point in the global war against terror," but urged him to back up military force with investments in economic development and infrastructure.

Afghans had suffered in misery as the world prospered, despite having helped end the Cold War by "shattering the invincibility of the Red Army" in opposing the Soviet invasion of the 1980s, Wardak said.

"We need the support of the people, and making sure their lives are better under this government will bring a lasting victory, not just military operations," said Wardak.

"The world is a global village ... and Afghanistan should never be allowed to become a failed state where the terrorists can hide and operate from."

Calling for a change of regime in Zimbabwe, Kenya's Odinga said the continent's leaders had failed the southern African nation's people, who are battling starvation and disease amid a power struggle between President Robert Mugabe and the opposition Movement for Democratic Change.

"African leaders have not had the courage to tell Mugabe that the time to leave has come," Odinga said. "The time to go is now."

But Kouchner said telling Mugabe to quit would not suffice: "There is a very real reason to go in -- with medical forces, not an army; a humanitarian intervention at least. Mugabe is not ready to leave. He is in good shape."

ElBaradei, director general of the International Atomic Energy Agency, called on Obama to move toward a "legal commitment" to abolishing nuclear weapons and said he hoped for a "safer, saner and more human" world.

"Does it really make any sense that we still have 27,000 warheads in existence?" ElBaradei asked. "Does it make sense that Russia and U.S. continue to deploy nuclear weapons against each other?"

He said the new administration in Washington should be open to dialogue in addressing all international issues, adding that he had had "zero confidence" in previous efforts to isolate Tehran. "Any time you try to isolate a country, the situation gets much much worse... Whether you like or dislike your enemy, you have to talk to them," he said.

He also called on Iran to cooperate with IAEA inspectors over its nuclear program, which Tehran insists is intended solely for peaceful purposes.

Iraqi Foreign Minister Hoshyar Zebari said Baghdad welcomed the "new direction" in Washington. "We have all been very encouraged by the positive messages we are getting on Iraq and Palestine," he said, adding that Iran was both "a neighbor and a friend."

He said military commanders and the Iraqi government would decide when U.S. troops would withdraw from Iraq, and predicted the situation in Iraq would stabilize in coming months. "This year Iraq will hold free elections and at the end of the year I hope you will see a different picture."

All About Davos • Iran • Barack Obama