JERUSALEM (CNN) -- Jewish officials in Israel and abroad are outraged that Pope Benedict XVI has decided to lift the excommunication of a British bishop who denies that Jews were killed in Nazi gas chambers. 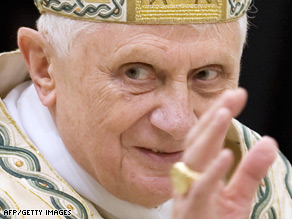 The decision by Pope Benedict XVI to welcome back the bishop has infuriated Jewish officials.

The pope's decree, issued Saturday, brings back into the Catholic Church's fold Bishop Richard Williamson and three other bishops who belong to the Society of Saint Pius X.

The liaison for Vatican-Jewish relations -- Cardinal Walter Kasper, head of the Pontifical Council for Promoting Christian Unity -- said he was not consulted.

"It was a pope decision" he told CNN in a phone interview. "I have my opinions about it, but I do not wish to comment on a decision made by the pope."

The Society of Saint Pius X was founded by Archbishop Lefebrve, who rebelled against the Vatican's modernizing reforms in the 1960s, and who consecrated the men in unsanctioned ceremonies. As a result, Pope John Paul II excommunicated the four in 1988.

Within the Catholic Church, many Vatican analysts suggests that in an attempt to heal one rift with ultra-conservative church members, the pope is risking creating a wider gap with those more liberal groups that have fully embraced the changes and reforms.

The church's decision to lift the excommunication comes a few days after a Swedish television aired an interview with Williamson in which the 68-year-old claimed the Nazis did not use gas chambers.

"I believe that the historical evidence is strongly against -- is hugely against -- 6 million Jews having been deliberately gassed in gas chambers as a deliberate policy of Adolf Hitler," he said in the interview, which appeared on various Web sites since its broadcast. What do you think?

"I believe there were no gas chambers," he added.

Prosecutors in Regensburg, Germany, where the interview took place -- and where the pope once taught -- are investigating Williamson's comments on suspicion of inciting racial hatred. Holocaust denial is treated as a crime in Germany.

Bishop Bernard Fellay, who now heads the society, distanced himself from Williamson's position. He told the Italian newspaper La Stampa that Williamson was responsible for his own opinions.

By "welcoming an open holocaust denier into the Catholic Church without any recantation on his part, the Vatican has made a mockery of John Paul II's moving and impressive repudiation and condemnation of anti-Semitism," he said.

"The decree sends a terrible message to Catholics around the world that there is room in the church for those who would undermine the church's teaching and would foster disdain and contempt for other religions, particularly Judaism," he said. "Given the centuries-long history of anti-Semitism in the church, this is a most troubling setback."

He said the Vatican's decision to accept Williamson was part of its desire to normalize relations with the ultra-conservative group, and had nothing to do with the bishop's personal views.

But Rabbi Rosen dismissed as meaningless the Vatican's claim that the decision to welcome back Williamson did not mean the pope shared his views.

That explanation "does not resolve the question of how can the pope or the Vatican -- committed to fighting anti-Semitism which the late Pope John Paul II called "a sin against God and man" -- embrace someone who denies or at least minimalizes the Holocaust.

The move has the potential to set back Jewish-Catholic relations, which was strained by Pope Pius XII. The Pontiff during World War II, he is accused by some historians of failing to speak out against the Holocaust.

"While there are still hundreds of thousands of living Holocaust survivors amongst us who carry the scars of the Holocaust in them, to accept back a Holocaust-denying bishop raises questions if the Vatican under Pope XVI has learned the lesson of the Holocaust," said Amos Hermon, who heads the Task Force Against Anti-Semitism at Israel's Jewish Agency.

Some theologians say the decision by the pope -- who said he wanted to unite the Catholic church -- could be counter-productive. "This is not so much an act of grace as a surrender," Vatican analyst Marco Politi told The Times of London.

Pope Benedict was seeking reconciliation, "but the new era has begun with a lie. The pope has made a openly declared and unshakeable anti-Semite a legitimate bishop," Politi added.

The pope has twice visited synagogues, in the U.S. and his home country Germany, but recently stated, according to The Times, that dialogue between Christians, Jews and Muslims "in the strict sense of the word" was "not possible."

CNN's Shira Medding in Jerusalem and Alessio Vinci in Rome contributed to this report.