DENDERMONDE, Belgium (CNN) -- Authorities have charged a 20-year-old man with murder and attempted murder in a stabbing rampage at a Belgian nursery school that left two children and a staff member dead and a dozen others wounded. 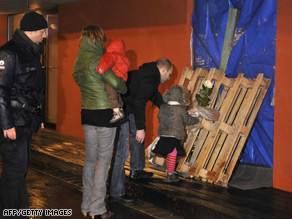 A family pays tribute Friday evening outside the nursery school in Dendermonde, Belgium.

The regional prosecutor's office identified the man, who has been in custody since Friday, as Kim D., and would not release his last name. They said he lives alone in Sinaai, a city about 20 kilometers (12 miles) outside of Dendermonde.

He has no police record and is unemployed, the office said.

Authorities allege the man, whose face was painted white with black rings around his eyes, entered the Fabeltjesland (Fable Land) nursery school midmorning Friday and began stabbing those inside.

He entered the building through a side door, typically only used by parents who are late in arriving to pick up their children from the school, authorities said. Once inside, he went through several rooms in the center.

The dead included the head of the nursery, a woman in her 60s who was well known in the town, residents said. The other victims were young; the nursery cared for children up to the age of three.

Authorities caught up with him about an hour-and-a-half later after the attack ended, the ministry said. At the time of his arrest, he had on him a knife, an ax and a fake pistol. He was wearing a bullet-proof vest, authorities said.

Two other knives were found at the nursery school, but it has not been confirmed whether they were used in the attack.

Kim D. has said nothing to authorities regarding the attack, the prosecutor's office said.

Authorities have searched his home, but they did not release any information from the search.

Watch description of what happened »

The suspect, who is being held in jail, is scheduled to appear in court Tuesday morning. The judge has assigned three doctors to monitor him, authorities said. Earlier, authorities said he was not registered with any psychiatric institution.

Dendermonde, about 16 miles northwest of Brussels, is a tight-knit community of about 40,000 people, residents said. Fabeltjesland lies off a park and is not easy to find from the road.

On Saturday, the nursery stood quiet and boarded up, with tributes of flowers, cuddly toys and cards left outside.