LONDON, England (CNN) -- Britain's accident prone "Octopus UFO" is just one of hundreds of unexplained sightings in the same area where a wind turbine was wrecked over the weekend, according to the latest reports. 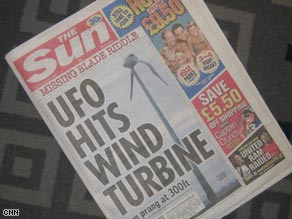 Britain's tabloid Sun newspaper Thursday proclaimed from its front page that a wind turbine was ruined after a UFO hit one of its 20 meter-long blades in Conisholme, Lincolnshire.

It quoted residents who saw strange balls of lights in the sky and heard a loud bang.

However, another British national newspaper said the lights were just fireworks from a staff member's dad's birthday celebration.

Turbine experts suggested it was a simple mechanical failure.

The plot thickened further Friday, with The Sun saying it had been "bombarded" with reports of UFO sightings from hundreds of witnesses in the area where the turbine was destroyed. Watch video on the UFO incident

"There have been reports of flying saucers for more than six months," the newspaper said.

Local John Harrison, 32, told The Sun he looked out of his window and saw "a massive ball of light with tentacles going right down to the ground."

Quoting unnamed Ministry of Defence "insiders," The Sun said the UFO sightings may be an unmanned stealth bomber on test flights.

It said the Taranis "black delta-wing craft" was being developed nearby to deliver bombs undetected in war zones; back to the testing board then?

However, initial reports when the Taranis contract was let last year said it would take at least four years to develop with flight testing due 2010... in Australia.

CNN has also been "bombarded" with messages, but mainly from people less than convinced.

J. Kale believed there was a very simple explanation.

"The octopus thing obviously thought the wind turbine was a female doing a mating dance and tried to mate with it."

Trevor Brown was worried the aliens did not "know how to drive a flying octopus."

Mono was worried what the aliens might think about the fuss.

Maxim, who lives near the turbines, had a simple explanation for the lights.

"On Sunday there was a very spectacular meteor shower, like fireworks on the horizontal."

Lilia was unimpressed with some of the explanations -- and your writer.

"Listen, just report the story and follow through. Think you can do that? Without screwing up? The plausible explanations are absurd. You are going to tell me that the residents of the area are not going to recognize fireworks? This is a ridiculous and insulting explanation and it sounds exactly like that, offensive and ridiculous. I don't know if there was a UFO or not, but it is all rather odd. What I do know is that the arrogant tone has got to stop."

Is it life Jim but not as we know it? Beam us up your thoughts.

All About UFOs and Alien Abductions • United Kingdom