LONDON, England (CNN) -- From January 28 to February 1 CNN is broadcasting live and reporting online from the World Economic Forum in Davos, Switzerland, as the world's leading power brokers and moneymakers gather to discuss the state of the world in 2009. 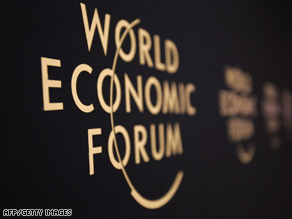 The world financial meltdown, renewed conflict in the Middle East, U.S. President Barack Obama's new White House administration and environmental issues are likely to be some of the topics at the top of this year's agenda.

You could have your questions asked on air by CNN Anchor Charles Hodson by e-mailing us at deardavos@cnn.com.

As part of this year's "Dear Davos" coverage, CNN has also invited a selection of influential bloggers to submit their questions to be put to our guests during our daily coverage.