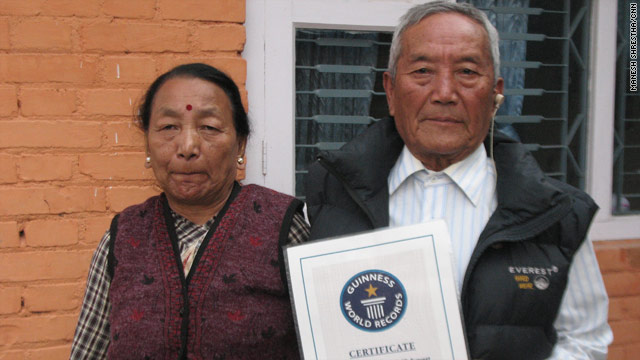 Kathmandu, Nepal (CNN) -- For Min Bahadur Sherchan, being recognized as the oldest person to climb the Mount Everest, the world's tallest peak, was the realization of a half-century old dream.

Sherchan climbed the 29,028 feet (8,848-meter) Everest at the age of 76 in 2008 but when the 2009 Guinness Book of World Records came out, Japanese national Yuichiro Miura was recorded as the oldest person to reach the top of the world aged a sprightly 75.

"I always knew the recognition would be coming because I am the oldest person to climb Everest," Sherchan told CNN at his home in Kathmandu.

In 2009, Sherchan traveled to London and spoke with Guinness about getting his climb recognized and then, back in Nepal, he collected the paperwork, photos, eyewitness verifications and media reports to confirm his ascent.

In August, he got confirmation from Guinness that his achievement was recognized, and the 2010 edition of its book of records will have his name in it -- the culmination of a 50-year dream.

It was in 1960 that Sherchan first thought of setting a mountaineering record. There had then been seven unsuccessful attempts on Dhaulagiri, the 26,795ft (8,167m) seventh highest peak in the world, located in central Nepal.

In the eighth expedition he went as a government liaison officer with the Swiss expedition to "study the mountain" hoping that this attempt too would fail so that he could be the first person to climb one of the tallest mountains in the world.

Sadly for him, the expedition was successful with four foreigners and six Sherpas reaching the top of the mountain but he was not among the team that reached the peak. "I then lost all hope of setting a mountaineering record," said Sherchan, now 78.

Two Japanese nationals had become the oldest people to climb Everest at nearly 70.

At the age of 72 he began his fitness preparations in earnest traversing Nepal north to south and east to west on foot. He walked 1,028km (640 miles) in 20 days from east to west Nepal and the following year he trekked about 300km from north to south in nine days -- a tougher walk because of mountainous terrain.

At a medical check up doctors told him he would have health problems if he went above 3,000 meters. "I couldn't believe it. This made him even more determined," said Sherchan.

To prove the doctors wrong he climbed the little-known 19,173ft (5,844m) Nayakhanga peak in central Nepal at 74-years-old.

The next challenge was financing the Everest expedition. He looked for Nepali government support but it was not forthcoming. But in South Korea some people helped him raise $50,000 needed for the climb.

His troubles were not yet over. He was too late to apply for a permit to climb that year, government officials said he could not climb Everest if he hadn't climbed a 6,000-meter peak and insurance companies originally said they would not cover him.

In 2008 there were more delays. Nepal had agreed to a Chinese request to not allow Everest expeditions in the buildup to the Beijing games when the Olympic flame was being taken up Everest. That moved the start of the climbing season back from April to May 10.

He was allowed to climb by the government if he did not lead the expedition so he found an experienced Sherpa mountain guide to lead but on eve of the climb the expedition leader came down with jaundice.

Another leader was found but it was too late to get another permit. "The government liaison officers of all the expeditions gathered at the mountain decided to overlook this requirement and allowed us to climb," said Sherchan.

The climb itself was straightforward and on May 25, 2008, at the age of 76 years and 340 days Sherchan became the oldest man to climb Everest. "At that moment I felt that taller than the mountain," said the former hotelier, roadbuilder and apple farmer, who now has the greatest of stories to tell his 17 grandchildren and five great grandchildren.