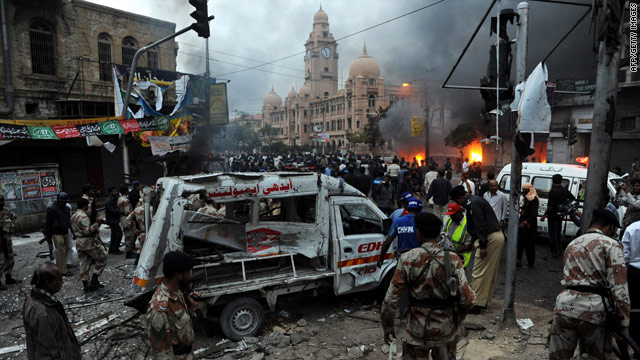 The blast on Monday targeted a Shiite procession on M.A. Jinnah Road.

The victims were among thousands of devotees commemorating Ashura, a major religious observance for the Shiites, one of two main Muslim denominations.

Ashura marks the death anniversary of Imam Hussein, grandson of Prophet Mohammed. Hussein, who was killed in battle in Karbala in 680 A.D., is regarded as a martyr -- and the battle is one of the events that helped create the schism between Sunnis and Shiites, the two main Muslim religious movements.

Religious mourning during Ashura is characterized by people chanting, beating their breasts in penance, cutting themselves with daggers or swords and whipping themselves in synchronized moves.

Shias are a minority in Pakistan.

No one has claimed responsibility for the attack. But the government is in the midst of an intense army offensive to rout militants from their haven along the country's border with Afghanistan. In retaliations, the militants have launched a series of deadly attacks in Pakistan.