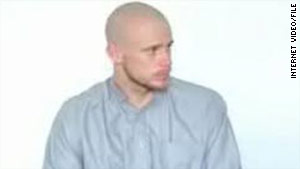 Pfc. Bowe Bergdahl appears in a video in July. The Taliban have released another video purporting to show Bergdahl.
STORY HIGHLIGHTS

Pfc. Bowe Robert Bergdahl, 23, disappeared from his combat outpost in southeastern Paktika province sometime after he finished his guard duty shift on the night of June 29. The military believes the man in the video is Bergdahl.

"To release this video on Christmas Day is an affront to the deeply concerned family and friends of Bowe Bergdahl, demonstrating contempt for religious traditions and the teachings of Islam," said U.S. Navy Rear Adm. Gregory Smith, spokesman for NATO's International Security Assistance Force.

Family members viewed the video shortly after being notified about its existence Friday morning, said Lt. Col. Tim Marsano, public affairs officer for the Idaho National Guard, who has been serving as a liaison between Bergdahl's family and the media.

"The Bergdahl family pleads with the captors to let our only son come home," Bergdahl's relatives said in a statement released through the Idaho National Guard. "To Bowe: we love you and we believe in you. Stay strong."

Wearing U.S. Army combat fatigues stripped of the name tag and rank, the man in the video identifies himself as Bergdahl and emphasizes that he has been treated humanely.

He says America has lost any hope of winning the Afghan war and that U.S. political leaders such as George W. Bush and Barack Obama cannot be trusted. He also asserts that the U.S. military's opponents in Afghanistan are "very smart" and have "perfected" warfare.

In the past, freed hostages have indicated their statements during captivity were forced and made against their will. Smith said the soldier in the video "was clearly compelled to read a prepared statement."

Watch part of the video

"It reflects nothing more than the violent, deceitful tactics of the Taliban insurgency. We will continue our search for Bowe Bergdahl as well as our efforts to ensure the security of the Afghan people and our coalition partners," he said.

A senior U.S. official, who could not speak on the record because of the sensitivity of the circumstances, said the sections of the video with interviews of Bergdahl appear to have been filmed some months ago.

The official said the document is not considered a "proof of life" video. The timing and authenticity of other sections of the video and the locations where it was made have not been determined, the official said.

Bergdahl, an airborne infantryman, also appeared in a 28-minute Web video released by the Taliban in July, in which he was calm but became emotional when speaking about his girlfriend and family and going home.