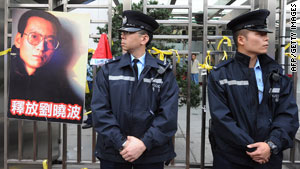 Beijing, China (CNN) -- Prominent Chinese dissident Liu Xiaobo, who was arrested in 1989 for his role in the Tiananmen Square protest, has been sentenced to 11 years in prison for his role in a separate subversion case, his lawyer said Friday.

Attorney Shang Baojun said that Liu's political rights would be suspended for two years under the sentence. Shang said he was disappointed with the verdict and felt the sentence was harsher than he had expected.

As for an appeal, Shang said he had not yet discussed the idea with his client.

Liu's wife, Liu Xia, said she attended the court session Friday and saw her husband for the first time since March. She told CNN Wednesday that police prevented her from leaving their home during the one-day trial.

Riding in a police vehicle as she spoke, Liu Xia said it was "inconvenient" to make further comments.

"The United States was deeply concerned to learn that ... Liu ... was found guilty of 'incitement to subvert state power,'" said Mark Toner, an acting State Department spokesman. "We call on the Government of China to release him immediately and to respect the rights of all Chinese citizens to peacefully express their political views."