U.S. slams deportation of Uyghur refugees from Cambodia to China 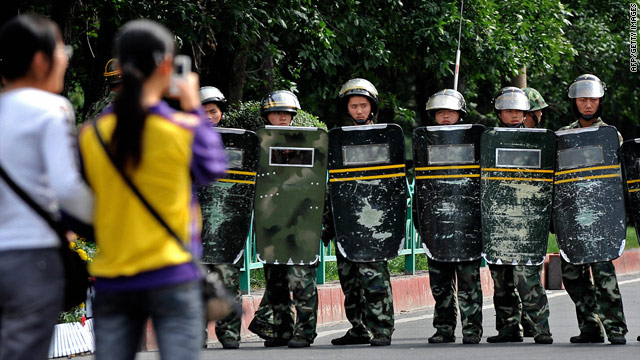 Two women stand by a roadblock as they take a picture in Urumqi, the capital of the Xinjiang Uyghur region, in September.
STORY HIGHLIGHTS

(CNN) -- The U.S. State Department said Sunday it was "deeply disturbed" at the deportation of 20 Uyghur asylum seekers from Cambodia back to China.

The deportation "will affect Cambodia's relationship with the U.S. and its international standing," said acting State Department spokesman Gordon Duguid in a statement.

It occurred on Saturday at the request of China, the U.S. said.

"The United States is deeply concerned about the welfare of these individuals, who had sought protection under international law," Duguid said.

"We are also deeply disturbed that the Cambodian government decided to forcibly remove the group without the benefit of a credible process for determining refugee status and without appropriate participation by the Office of the U.N. High Commissioner for Refugees."

Video: Uyghurs sent back to China

Kitty McKinsey, a coordinator with the U.N. High Commissioner for Refugees agency in Asia, told CNN on Saturday that the refugees had been seeking asylum. China's northwestern region was wracked by ethnic violence between Han Chinese and Uyghur Muslims earlier this year, and the Uyghurs fled to Cambodia to escape the unrest.

McKinsey said the UNHCR considers the deportation a breach of international law, and Uyghur human rights activists have expressed concern about the move. The Uyghur American Association also expressed concern in a statement.

The 20 were held in handcuffs and leg shackles and were not given any food to eat on Friday, according to the association. They were part of a group of 22 Uyghurs seeking refuge in Cambodia, all of whom were under UNHCR protection when taken into custody.

"The United States strongly opposed Cambodia's involuntary return of these asylum seekers before their claims have been heard," the State Department said.

Duguid urged the Chinese government to "uphold international norms and to ensure transparency, due process and proper treatment of persons in its territory" now that the Uyghurs have been returned.

Cambodian and Chinese officials could not immediately be reached for a response. But a Cambodian state media outlet, Agence Kampuchea Presse, reported that Chinese Vice President Xi Jinping is to arrive in Cambodia on Sunday for a three-day visit.