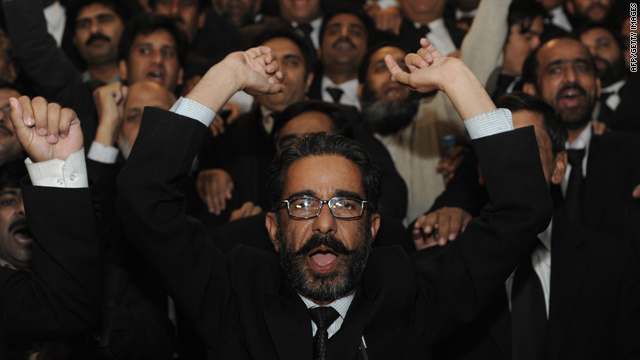 (CNN) -- Pakistan's Supreme Court declared on Wednesday that an amnesty that had protected politicians, including President Asif Ali Zardari, from corruption and criminal charges, was unconstitutional.

The 17-judge court invalidated the National Reconciliation Order, saying in its ruling that the amnesty "seems to be against the national interest" and "violates various provisions of the Constitution."

The order, passed in October 2007 under then-President Pervez Musharraf, protected thousands of bureaucrats and politicians, including Zardari and his wife, late former Prime Minister Benazir Bhutto, from corruption and criminal charges.

The supreme court said its ruling revived all cases that had been suspended or withdrawn under the amnesty.

There was no immediate response from Zardari's government to Wednesday's ruling. However, as president, Zardari still has immunity from prosecution.

Although he was never convicted, Zardari spent 11 years in jail on corruption allegations that he called politically motivated.

Bhutto had faced corruption charges in at least five cases, but was not convicted. Before her return to Pakistan to take part in the elections in 2007, she had been in self-imposed exile for eight years after being convicted on money-laundering charges.

When Bhutto was prime minister, frequent accusations of corruption against her husband, Zadari, of stealing from government coffers and accepting kickbacks, prompted many Pakistanis to derisively label him "Mr. 10 Percent."

He became the Pakistan People's Party head after Bhutto was assassinated during a campaign rally in December 2007, and he became president eight months later.

The PPP had tried in October to extend the amnesty ahead of its deadline, but faced strong protest from opposition parties in parliament.

A day ahead of the amnesty's expiration, Zardari told Pakistan's Express News that he still had immunity as president and wasn't concerned about the reopening of cases against him.

The president's spokesman echoed that sentiment in November. "The president is absolutely not concerned," presidential spokesman Farhatullah Baber told CNN.

"It's whatever the courts decide. We will cross that bridge when it comes," Baber said.