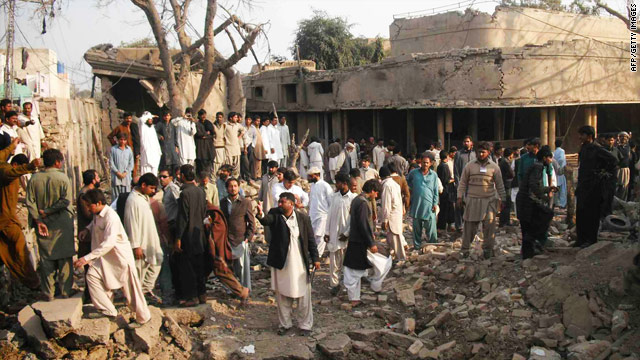 Rescuers and onlookers gather at the site of a car bomb blast in Dera Ghazi Khan, Pakistan, on Tuesday.
STORY HIGHLIGHTS
RELATED TOPICS

Islamabad, Pakistan (CNN) -- The death toll from an explosion in the central Pakistani city of Dera Ghazi Khan climbed to at least 25 on Wednesday, a senior government official said.

Another 56 people were wounded in Tuesday's attack, according to Hassan Iqbal Khan.

The blast ripped through a market located near the house of a senior adviser to the chief minister of Punjab province, said Mohammed Hasnain, a rescue official.

The adviser, Sardar Zulfiqar Muhammad Khosa, is a former provincial governor and a senior opposition party politician. He said he was the target of the attack, though police initially said he was not the intended target.

Khosa told CNN that none of his family members were in the house when the attack occurred. He also said that he had never before received any threats against his life.

The attacker detonated his car in front of the main gate at Khosa's house, said Hassan Iqbal, a senior government official.

About 20 shops in the market were reduced to rubble.