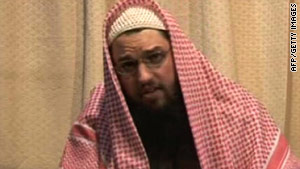 (CNN) -- An al Qaeda spokesman released a video message in English offering condolences to its "unintended Muslim victims" killed in attacks in Afghanistan, Pakistan and elsewhere.

Al Qaeda "have condemned and continue to condemn" all attacks by Western powers or "secular political forces," Gadahn said.

"We express our condolences to the families of the Muslim men, women and children killed in these criminal acts," he said in the video. "And we ask Allah to have mercy on those killed and accept them as shohadaa (martyrs)."

It is a rare example of al Qaeda offering condolences to the families of those killed in the group's own attacks.

The video comes nearly two weeks after U.S. President Barack Obama announced the deployment of 30,000 additional U.S. troops to Afghanistan, as part of a strategy to reverse the Taliban's momentum and stabilize the country's government.

Obama said he would begin sending the additional troops in early 2010, with the goal of starting to withdraw all forces from Afghanistan by July 2011. The additional forces, Obama said, will help accelerate the handing over of responsibility to Afghan forces.

The video did not address the troop surge, but Gadahn had a general warning to any countries partnering with the United States in the region.

"Those who have made the foolish decision to stand with America and its allies in their losing war against Islam ... you have not only betrayed Islam and Muslims and left the fold of faith, but you have also caused the destabilization of nations and the displacement ... of thousands of weak and oppressed people," Gadahn said.

"The blood of countless Muslims is on your hands, and the security and very future of the countries you claim to defend and serve has been placed in jeopardy because your external enemies are taking advantage of your heedlessness as you fight and kill your fellow countrymen for American dollars."

The al Qaeda member is an American-born Muslim convert who has released video and audio statements in the past.

Gadahn is on the FBI's list of most-wanted terrorists. The FBI says Gadahn was indicted in the Central District of California for treason and material support to al Qaeda, charges related to Gadahn's alleged involvement in a number of terrorist activities, including providing "aid and comfort" to al Qaeda and services for al Qaeda.

Pakistani news outlets reported twice in 2008 that Gadahn had been killed by a predator drone strike, but al Qaeda then released a video message by Gadahn to prove he was still alive.

Al Qaeda uses Gadahn to issue messages to a wider and English-speaking audience. His whereabouts are unknown. Many analysts believe Gadahn remains in touch with al Qaeda's second-in-command, Ayman al-Zawahiri.