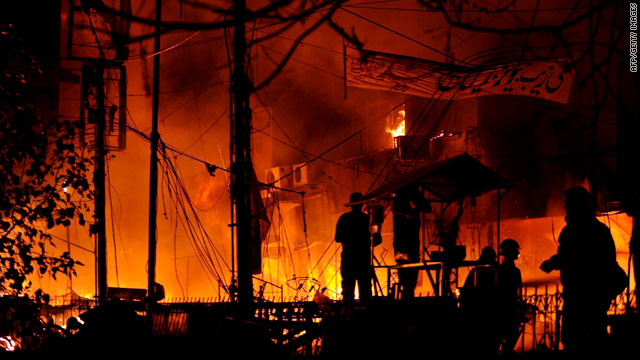 Pakistanis gather at the site of Monday's blast in Lahore.
STORY HIGHLIGHTS

Islamabad, Pakistan (CNN) -- Thirty-six people were killed and dozens were injured in explosions at a market in Lahore, Pakistan, on Monday, an official said.

The explosions did not appear to be a suicide attack but could instead have been bombs detonated by remote control, Punjab Police Chief Tariq Salim said.

The nation's state-run news agency, Associated Press of Pakistan, said the blasts were the result of "bomb explosions."

The explosions occurred at Moon Market in the Iqbal Town neighborhood, the news agency said. It cited Iqbal Town Division's Ali Nasir Rizvi as saying most of the victims were women.

Khusro Pervaiz, a senior government official in Lahore, said in a television interview that 60 people had been taken to five Lahore hospitals.

The blasts happened around 8:45 p.m. at the popular market, said Rai Nazar Hayat, a spokesman for Lahore police.

Earlier, ten people were killed -- including two police officers -- when a suicide bomber detonated outside a district courthouse in Peshawar on Monday, officials said.

At least 36 were injured, six of them seriously, said Dr. Hameed Afridi, CEO of the Lady Reading Hospital.

The bomber got out of a rickshaw and detonated himself, according to witnesses.

The attacker was wearing a suicide jacket with about 6 kilograms of explosives, said Shafqat Malik, head of the North West Frontier Province bomb disposal unit.

Peshawar is the capital of the Northwest Frontier Province, where the Pakistani government waged a recent military offense against Taliban militants.

Meanwhile, five people were hurt in a bomb attack in Quetta on Monday morning, said Jamil Kakar, a Quetta police official. The explosives were placed in a car and destroyed two other cars and three motorbikes.

The courthouse attack comes three days after four militants armed with guns and grenades stormed a mosque in Rawalpindi frequented by military personnel. At least 36 were killed and 75 wounded.

The Pakistani Taliban claimed responsibility for the mosque bombing. The Tehrik-i-Taliban Pakistan reiterated its claim in an e-mail to CNN the next day, after media outlets quoted officials who doubted the group's participation.

"We reconfirmed it, that the TTP has done it and will do more which are already planned," the group said in the e-mail. "We once again mention that we are not against the innocent people and the state of Pakistan but against those officers and ministers who are American by hearts and minds and Pakistani just by faces."

Rawalpindi is the headquarters of the Pakistani army.