Arrests made under martial law in Philippines 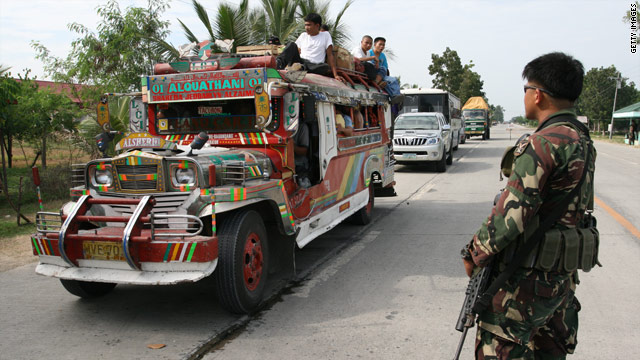 (CNN) -- Troops in the southern Philippines early Sunday took advantage of martial law to hunt down those believed responsible for last week's killings there.

Maj. Randolph Cabangbang, deputy of operations for the Eastern Mindanao command, told CNN on Saturday that searchers have made arrests and recovered firearms and vehicles from a clan implicated in the killings. He said local residents welcome the deployment of the troops.

"We need this because we do not want those who perpetrated the crime to slip out of the province. And we may be having a hard time catching them," he said.

Army spokesman Lt. Col. Romeo Brawner Jr. said martial law -- under which police can make arrests without a warrant -- went into effect at 9 p.m. Congress would have to approve any extension beyond 60 days.

Brawner said the measure was invoked to impose peace on the region after the unrest, which led to troops being mobilized.

"Life is to resume normally and martial law is established to prevent new violence, with troops on the ground monitoring any possible violence breakout," he said. "But the civilian government will be running the affairs of the province, not a military governor."

Military police have detained three brothers and their father on suspicion of involvement in the unrest: Akmad Ampatuan, the vice governor of Maguindanao; Anwar Ampatuan, the mayor of Sherif Auguak, Maguindanao's capital; and Zaldy Ampatuan, governor of the Autonomous Region of Muslim Mindanao.

Andal Ampatuan Sr., the patriarch, became ill and was hospitalized after he, too, was taken in.

"Local government will function, it will prevent armed groups from wreaking havoc ... and it will allow the officials search and find the guilty parties," Brawner said.

Security forces on Friday searched the home of Andal Ampatuan Jr., mayor of Datu Unsay and son of the provincial governor of Maguindanao, according to Brawner.

On Tuesday, Philippine authorities charged Ampatuan and other suspects with 25 counts of murder in the killings. Still more suspects were taken into custody Friday.

The Philippine military is investigating its own forces in connection with the case as well, Brawner said.

The National Bureau of Investigation has moved a third witness to Manila for questioning, the Philippines News Agency reported Thursday.

"At the moment, we are interviewing the witness so that we would know what he knows about the incident in Maguindanao," NBI Director Nestor Mantaring said. The witness claimed to have been at the site during the massacre.

"He is very vital," Mantaring said. "From what I know ... he knows a lot of information regarding the incident."

Among the victims in the massacre were the wife and sister of political candidate Ismael "Toto" Mangudadatu, who had sent the women to file paperwork allowing him to run for governor of Maguindanao. He said he had received threats from allies of Gov. Andal Ampatuan, the father of the accused mayor, saying he would be kidnapped if he filed the papers himself.

Witnesses and local officials have blamed the younger Ampatuan, a longtime ally of the Philippines president and a known warlord. They said the killings were an attempt to block Mangudadatu from challenging him in the May gubernatorial election.

Asked why martial law was imposed 12 days after the killings, Cabangbang said authorities "were trying to build a case -- a tight case" against suspects.

"But it is taking long to build a case, so I think the government gave us a free hand in arresting those who are suspects, and allowed us to search, even without warrant. So we really need this declaration of state of martial law."

Violence in the run-up to elections is not uncommon in the Philippines. The Maguindanao massacre, however, is the worst politically motivated violence in recent Philippine history, according to state media.

Suspicion fell on Ampatuan after a government construction vehicle was found at the hastily dug mass grave that held the bodies of the massacre victims.