Fire kills 20 at disco in Indonesia 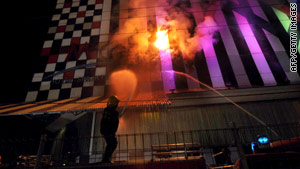 At least 20 people were killed Friday night in a fire at an Indonesian discotheque.
STORY HIGHLIGHTS
RELATED TOPICS

(CNN) -- A fire at a karaoke bar and discotheque in Medan, in Indonesia's North Sumatra province, killed at least 20 people Friday night, according to a hospital.

At least two people survived, according to Aida Sofiati of the Pringadi Hospital in Medan.

Mohammad Zein, a fire official, said the blaze started around 10 p.m., but firefighters were able to extinguish it within a half-hour.

He said the cause of the fire was not known.