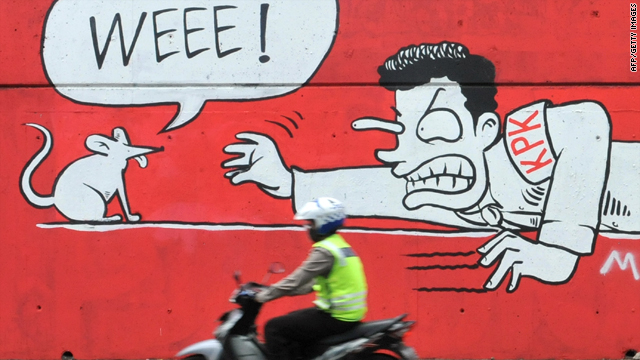 A policeman rides past a mural in Jakarta on November 24, 2009, that symbolizes how hard the country's Corruption Eradication Commission (KPK) efforts to combat corruptions are.
STORY HIGHLIGHTS
RELATED TOPICS

The move was sparked by growing public and legislative dissatisfaction over investigations into a bailout of Century Bank. The makeup of the task force is expected to be decided on Friday, according to the House of Representatives.

The powers are known as Angket Rights or inquiry rights -- the House's strongest investigative tool -- and could become the starting point of a widespread corruption case. Indonesian police, an anti-corruption agency and the attorney general's office have all implicated each other since the Century Bank investigation began and has expanded into other corruption cases.

Critics of President Susilo Bambang Yudhoyono, who ran on an anti-corruption platform, have accused him of being indecisive in the midst of the corruption allegations.

Century Bank, a small but politically connected bank, began to fail in 2008, according to government documents.

The corruption investigation centers on attempts to bail out the bank and possible corruption and mismanagement in those attempts.