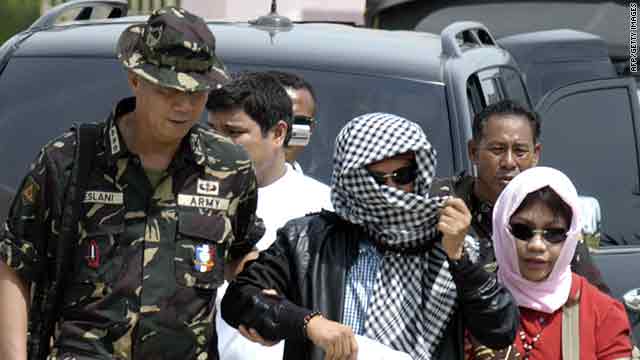 Andal Ampatuan Jr., center, with his wife is escorted by military personnel in Maguindanao on Thursday.
STORY HIGHLIGHTS
RELATED TOPICS

Manila, Philippines (CNN) -- Philippine authorities charged a mayor and a group of unidentified suspects with 25 counts of murder Tuesday in the slaying of dozens of unarmed people, a court spokesman said.

Authorities have said that Andal Ampatuan Jr. -- mayor of Datu Unsay and son of the provincial governor of Maguindanao -- was the architect of the Nov 23 politically motivated killings of 57 people.

More charges could be filed, said Rolly Faller, chief of staff of the secretary of justice in the Philippines.

Suspicion fell on Ampatuan after a government construction vehicle was found at the hastily dug mass grave where the massacre victims' bodies were found.

Among the victims were the wife and sister of political candidate Ismael "Toto" Mangudadatu, who had sent the women to file paperwork allowing him to run for governor of Maguindanao. He said he had received threats from allies of Gov. Andal Ampatuan, the father of the accused mayor, saying he would be kidnapped if he filed the papers himself.