Philippines politician to be questioned 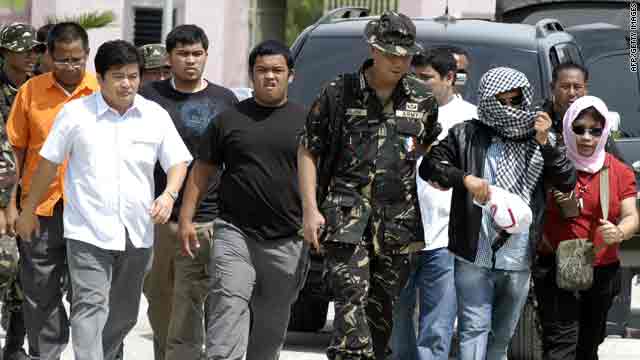 Manila, Philippines (CNN) -- The son of a Philippines provincial governor is voluntarily turning himself in for questioning in the massacre of at least 57 unarmed civilians, a CNN affiliate reported Thursday.

Andal Ampatuan Jr. -- who is the mayor of Datu Unsay and the son of Maguindanao Governor Andal Ampatuan -- has agreed to face questioning, reported Patricia Evangelista of ABS-CBN.

Ampatuan was not identified by authorities as a suspect in the killings in the southern Philippines, though victims' survivors and local media reports had done so.

Philippines President Gloria Macapagal-Arroyo "is enraged by these barbaric acts," spokesman Cerge Remonde said. "She has literally thrown the full force of the law and has mobilized the security and police forces of the state to go after the perpetrators."

Philippines authorities had disbanded a paramilitary force in the southern Philippines suspected of playing a role in the massacre, the country's state-run media reported Wednesday.

Remonde said the deaths were the result of a political clan war, not Muslim secessionism in that troubled region of the country.

"So far as this case is concerned, this is a limited clan political rivalry, which has been going on for some time now," Remonde said.

The death toll grew Wednesday after 11 more bodies were recovered from a rural area of Mindanao and buried. Arroyo has declared Wednesday a national day of mourning.

Arroyo's government is under intense pressure to find those responsible for planning and carrying out the abduction and killing of the group of about 60 politicians, lawyers and journalists -- and reportedly some bystanders.

Suspicion has fallen on the Ampatuan family, key allies of the Arroyo administration in the Maguindanao region of the southern Mindanao province.

Ampatuan family members have not commented on the slaying allegations.

Remonde appeared to blame the Ampatuan clan, adding: "There is, however, a move now by the administration party to expel the suspected clan."

Those killed include the wife and two sisters of a local politician who plans to run for the spot vacated next year by Maguindanao's governor, Andal Ampatuan.

While the investigation is ongoing, a spokesman for the country's national police has said that Andal Ampatuan Jr. has been linked to the crime, according to local media reports.

"According to the initial reports, those who were abducted and murdered at Saniag were initially stopped by a group led by the mayor of Datu Unsay," National Police spokesman Chief Superintendent Leonardo Espina said, according to ABS-CBN News.

The massacre is the worst politically motivated violence in recent Philippines history. On Monday morning, in daylight, a group of about 100 gunmen stopped a convoy carrying supporters and family members of local politician Ismael "Toto" Mangudadatu, witnesses and officials say.

Mangudadatu had sent his wife and sisters to file paperwork allowing him to run for governor of Maguindanao in May after he had been threatened and told not to file the papers himself. He said the threats came from allies of Governor Ampatuan.

The number of people kidnapped and killed was still unclear, as recovery continued at the mass grave site in Maguindanao.

A car traveling behind the convoy was mistaken for being a part of the politician's contingent, a local official told the Philippines GMA News Network.

The car was instead heading to a hospital, according to Tom Robles, head of the Tacurong City Employees Union, who spoke to GMA News. The driver and four passengers -- including a government employee who had suffered a mild stroke and his wife -- were rounded up and killed along with the members of the convoy ahead of them, Robles said.

A police official confirmed that the car and the bodies of three of the passengers were among those recovered at the grave site, GMA reported.

The state-run Philippines News Agency said the ruling Lakas-Kampi-CMD (Christian, Muslim, Democrats) was to meet Wednesday to discuss whether to remove the Ampatuan clan members in Mindanao from the party as a result of the killings.

"In our opinion, they were not able to fulfill their obligations to the party," said former Defense Secretary Gilberto "Gibo" Teodoro, Lakas-Kampi-CMD national president and the party's standard bearer in the 2010 elections, in a radio interview, according to PNA.

Ampatuans hold leadership positions in the Autonomous Region in Muslim Mindanao, including governor of the region, governor of Maguindanao and mayor of Datu Unsay.

"Like many others, I am appalled and outraged by it, and I join the rising chorus of indignation against it," Arroyo said. "This is not a simple election feud between opposing clans; this is a supreme act of inhumanity that is a blight on our nation. The perpetrators will not escape justice. The law will haunt them until they are caught."