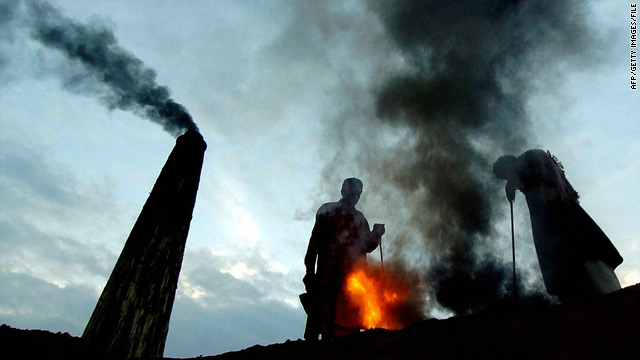 Lahore, Pakistan (CNN) -- Every morning 17-year-old Naser wakes up to make bricks, toiling for 14 hours a day, seven days a week. This is what he has done almost all his life. He's never been in school and he's never had the chance of a proper childhood.

Naser -- not his real name -- is among hundreds of thousands of so-called bonded child laborers at Pakistan's brick kilns. These workers are trapped by family debts that are often impossible to pay off.

If he refuses to obey his boss, Naser says he pays a price: "He beats me up if the work doesn't get done."

Despite being illegal in most countries where it is found, rights groups say bonded labor is one of the most widespread methods of forcing people to work against their will. The U.N. say bonded laborers form account for many of the 12 million people the U.N. identifies as modern day "slaves."

Entire families in countries such as India, Nepal and Brazil find themselves unable to escape spiraling debt and threats of violence, sometimes resorting to desperate measures to free themselves or their children, according to human rights advocates.

In Pakistan, human rights groups say kiln owners often dupe the poor into bonded labor by giving them loans. Families agree to work off the debt but their bosses add on high interest and living expenses, making it impossible to repay the debt, as their salaries are often less than $5 a day.

"Forced labour -- you can say it's the worst form of slavery," says Ghulam Fatima of the Bonded Labour Liberation Front, a human rights advocacy group which fights to free families from Pakistan's brick kilns.

If any laborer refuses to work, Fatima says they face brutal recriminations.

Forced labour -- you can say it's the worst form of slavery.
--Ghulan Fatima of the Bonded Labour Liberation Front

"Even a lady who has given birth to a child, she has to work there. If she will not, she will be treated harshly."

Some bonded laborers, like Muhammad Mansha, another Pakistani kiln worker, have resorted to desperate measures to liberate their families from the relentless life of drudgery. Mansha says he had to sell his kidney in a bid to buy his children out of the family's debt.

Eventually it fell to Fatima to help free Mansha and his children. But countless families remain trapped and, she says, the government has done little to help.

While the government wouldn't comment to CNN for this story, officials have previously said that thousands of bonded laborers have been denied their rights and that they have resolved to tackle the issue.

Bonded labor has been outlawed in Pakistan and most other affected countries in line with U.N. conventions on human rights.

But, according to a 2009 report by Gulnara Shahinian, the United Nations Special Rapporteur on contemporary forms of slavery, it remains a global problem affecting millions.

Particularly at risk are those beholden to caste systems in societies across Asia, migrant workers and those who fall prey to human traffickers.

CNN recently highlighted the case of a woman in Indonesia who was sold into sex slavery in Saudi Arabia after traveling there as a migrant worker hoping to send money back home to support her impoverished family.

Sunarsih -- not her real name -- says she fled her first employer after being molested, only to be sold to a pimp for $1,300 who allowed her to be repeatedly raped and sodomized for more than a year until a police raid led to her arrest, imprisonment and deportation.

"I felt like I was dying. It would have been better for me to commit suicide," she said in an even voice, despite a few tears betraying her pain. "I was humiliated. They treated me like an animal. But the pimp said that the clients paid a very high price for me."