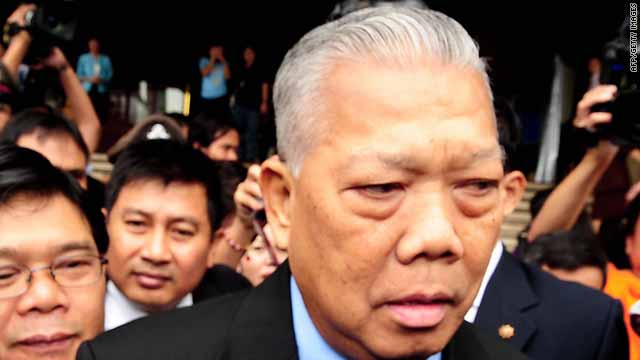 Samak died after a two-month hospitalization at Bangkok's Bumrungrad International Hospital for liver cancer, said his personal secretary, Paisarn Akkasarakul. Samak was 74 and had battled cancer for a year.

His funeral will be held at Benjamaborpit Temple and a royally sponsored bathing rite is set for Wednesday, the Thai News Agency said.

Samak steered the People Power Party to victory in December 2007 in the first democratically held election since a bloodless coup the year before.

But the veteran politician and former governor of Bangkok was accused of being a nominee of friend and former Prime Minister Thaksin Shinawatra, whose administration was mired in allegations of corruption.

Samak also faced allegations of corruption, appealed a three-year prison sentence for defaming a deputy governor and dealt with an election commission decision that his party had committed fraud in the 2007 balloting and should be dissolved.

His nine months in office ended last year with political crisis in Thailand.

Thousands of protesters camped outside the government's headquarters and blocked Samak from entering.

But it was his television show, "Tasting While Grumbling," that ultimately ended Samak's career. As host, Samak served up his favorite Thai dishes, as well as commentary that struck his fancy

He was forced to step down as prime minister in August 2008 after Thailand's Supreme Court ruled that he had violated the constitution by accepting payment to host the popular show.