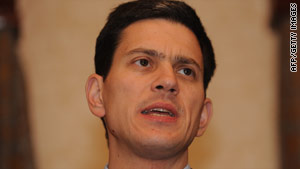 He also said Britain is ready to raise its "already high contributions" to the country on the basis of an agreed strategy.

While Miliband did not specify whether that meant troops, British Prime Minister Gordon Brown has said he will commit at least 500 more to Afghanistan.

Miliband's speech came a day after Brown urged NATO allies to chart a "comprehensive political framework" so that the military strategy in Afghanistan can succeed.

Brown called for an international conference to be held in London next year to devise that framework and start planning a district-by-district handover of power in Afghanistan.

"We will succeed in Afghanistan only when our military resources and development assistance are aligned behind a clear political strategy," Miliband told NATO's annual session in Edinburgh, Scotland.

"Unless we get this right, our military will be able to suppress the cancers of insurgency and instability but not tackle their root causes."

The political strategy should focus on keeping al Qaeda out of Afghanistan, gathering various tribal groups, and having Afghanistan's neighbors ready to play a "constructive role" in the country's future, Miliband said.

The military strategy should be part of the larger political framework, Miliband said.

"Security, formal and informal, is inseparable from governance," he said.

But with a divided insurgency that sometimes takes orders from the Taliban and at other times acts on its own, NATO's military operations can at best weaken the insurgency and bring short-term success, Miliband said.

Only a comprehensive strategy can put a stop to the insurgency and ensure that British troops do not have to return to Afghanistan, he said.

"Our goal is not a fight to the death," he said. "It is to demonstrate clearly that they (the insurgents) cannot win, and to provide a way back into their communities," Miliband said.

Some 36,000 troops from 43 countries are serving in Afghanistan. Of those, about 9,000 are from Britain, which is the largest contributor of forces after the United States.

Brown has said he is willing to commit at least 500 more troops and expects other NATO members to send as many as 5,000.

But with the number of NATO casualties climbing -- Britain has lost more than 200 servicemembers in Afghanistan, including more than 100 in the past year alone -- public support for the war has been fading in Europe.

In Britain, public criticism has been mainly about the perception that British troops are under-supplied in Afghanistan -- a belief that Brown and the government have repeatedly rebutted.