Dog back after a year MIA in Afghanistan 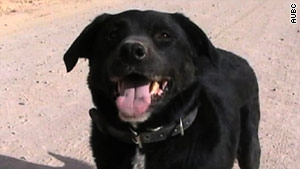 An American soldier knew Sabi was not a stray when she responded to commands.
STORY HIGHLIGHTS

(CNN) -- An Australian special forces dog has been found alive and well more than a year after going missing in action in Afghanistan.

Explosives detection dog Sabi was recovered by a U.S. soldier who found her wandering near an isolated patrol base in the desolate southern province of Oruzgan last week, according to the Australian Government Department of Defense.

John, the U.S. soldier, who was identified only by first name, knew his Australian counterparts were missing an explosive detection dog. He knew immediately that Sabi was not a stray.

"I took the dog and gave it some commands it understood," he said.

When she disappeared, the black Labrador was nearing the end of her second tour of duty in Afghanistan. She went missing in September 2008 when insurgents ambushed a combined Australian, U.S. and Afghan army convoy. Nine Australian soldiers, including Sabi's handler, were wounded during the gunbattle.

"She's the last piece of the puzzle," Donaldson said. "Having Sabi back gives some closure for the handler and the rest of us that served with her in 2008. It's a fantastic morale booster for the guys."

The 4-year-old canine was flown to the Australian base of Tarin Kowt to be reunited with one of her trainers.

"I nudged a tennis ball to her with my foot and she took it straight away. It's a game we used to play over and over again during her training," said the trainer, whose name was withheld for security reasons. "It's amazing, just incredible, to have her back."

Sabi will now undergo quarantine before a decision is made about when she can return to Australia. A veterinary assessment into possible exposure to diseases is under way. If the tests prove negative, Sabi will be cleared to return home.