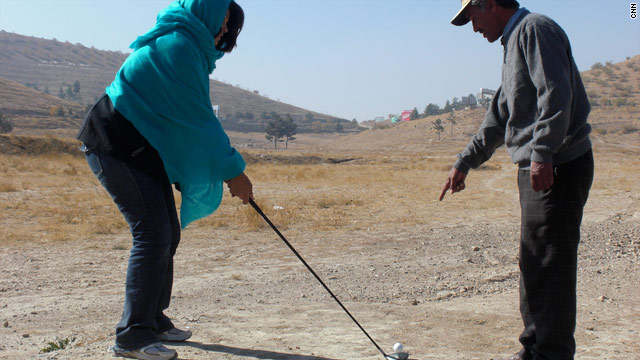 Kabul, Afghanistan (CNN) -- Why would anyone open a golf course in Afghanistan in the midst of war? One man in Afghanistan can answer that question with the kind of conviction that is hard to challenge.

"Why not?" Mohammed Afzal Abdul said. "I like very much golf."

Actually he loves it -- which could explain why Abdul has taken it upon himself to run the only golf course in the country. He is so passionate about it he has risked his life for the love of the game and the crumbling course. I'll get to that in a second.

First I've got to give you a good mental picture of the course. It is located on the outskirts of Kabul. To get there you have to drive along a road that is considered risky, especially for foreigners, because of the threat of being robbed or kidnapped.

If you are not careful you will drive right past the course. Besides a dilapidated sign, the only hint there is a golf course here are the red flags on the hole-pins waving in the wind.

It's an 18-hole course, if you use your imagination.

"I have 9 holes and we change the tees to make 18," course director Abdul said.

"So you play on the same hole?" I said. "Yeah, same hole and the tees change," he replied with a grin.

Speaking of tees, on this course you need one for every swing. There are stones the size of a fist scattered about. There is a deep ditch that runs through most of the fairways and the putting greens are grey. Abdul made them by soaking the sand in oil, an old trick to keep the sand from blowing away.

The before he is referring to is the time before the Taliban and Russians invaded.

When the Russians came to what was a grassy course they rode their tanks right up onto the seventh hole, according to Abdul. Then they stayed, using the place as a military base. Thirty years later, peering down from a hill, a decaying Russian tank is still visible from the golf course.

"You see I show you the tank the old tank there, that's a Russian tank. He said, "Top to the hill, okay?"

When the Russians finally left Abdul tried to restore the course but then the Taliban came along. They also left behind a mess. He says the members only Golf Club Bar was blown apart because it sold alcohol against the Taliban's strict rules.

Abdul says both invaders arrested him.

"They treated me like an animal" he said, this time speaking in Dari, his native language, because he couldn't find the right words in English.

Both times he was accused of being a spy. His golf course attracted foreigners and Abdul knew many of them including the diplomats, which made Abdul a target of suspicion by both groups.

At one point war chased Abdul out of his country and into Pakistan but he returned with new determination to win his fight, this time with the weeds.

When he first arrived he had to do something animal lovers will undoubtedly find disturbing. He rented sheep from the herders to trample all over the grounds. The reason? He needed to know if there were any unexploded landmines on the course grounds. He wouldn't say if those sheep found any just that he had paid for their services.

Then he says some "English people" offered to do a more thorough check and gave the all-clear. And with that, there he was, a man with a dream, a few ancient looking clubs, balls and battered golf shoes to rent, and the ability to teach.

"Slow down!" he said through his broken teeth when I took a practice swing on the second hole. He was right. I swing a golf club like a baseball bat. "Try again," he added with a smile. I did and when the ball left the tee he laughed and said "nice shot."

No matter where you hit your first shot here, the second shot is bound to be brutal every time. Which is why any golfer who braves the Kabul Golf Club must read and follow the rules, clearly stated inside the clubhouse.

"Attack the course! Play aggressively. There are no gimmes. This is golf with an attitude."