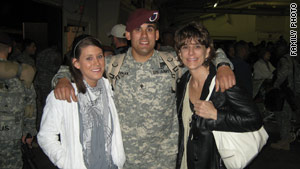 Kabul, Afghanistan (CNN) -- Military divers have found the body of a U.S. paratrooper who went missing last week in a river in western Afghanistan.

The NATO-led International Security Assistance Force said the soldier was found close to where he disappeared November 4. Officials are continuing their search for a second paratrooper lost at the same time.

Both men -- from the 4th Brigade Combat Team, 82nd Airborne Division -- disappeared in the Morghab River near Afghanistan's border with Turkmenistan. The men were on a routine resupply mission, the NATO group said.

Family members identified the recovered body as that of Benjamin Sherman, 21, of Plymouth, Massachusetts.

They said he jumped into the river when he saw a fellow soldier struggling in the water.

"I know that day he jumped into the river to try to save his comrade was because he didn't just see another soldier in the water; he saw his brother," said Sherman's sister, Meredith, in a statement to CNN affiliate WCVB in Boston, Massachusetts.

"He didn't jump in because he was trained to but because that's what his heart told him to do."

Sherman's mother, Denise, said the family called him "the unstoppable one."

"I raised him with the understanding that when you choose to do something, you do it to the best of your ability," she said in a statement to WCVB. "He was powerful, ingenuous and determined."