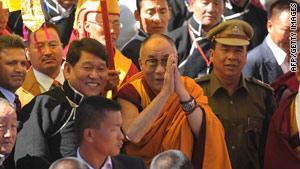 NEW DELHI, India (CNN) -- The Dalai Lama on Sunday visited a region of India close to Tibet which China claims as its own, his spokesman said.

It is the second time this year the Dalai Lama has visited a region over which China claims sovereignty, after a trip to Taiwan this summer.

China -- which controls Tibet -- sees the Dalai Lama as a separatist and has pressed countries around the world not to extend official recognition to him.

He fled Tibet as a youth and has lived across the border in India for decades.

His visit to the region comes barely a month after China lodged a protest with India over a trip to Arunachal Pradesh by Indian Prime Minister Manmohan Singh.

India and China fought a brief but bitter border war over the region in 1962.

India regards Arunachal Pradesh as an "integral" and "inalienable" part of the country.

Aides of the Dalai Lama insisted his Arunachal trip was "non-political." "He is there mainly for teaching and meeting people," Taklha said.

The Dalai Lama said his trip to Taiwan in August was also not political, but to pray with survivors of a devastating typhoon.

On Sunday, he led prayers at a monastery in Tawang after his arrival. The visit is due to last until until November 15, his spokesman said.