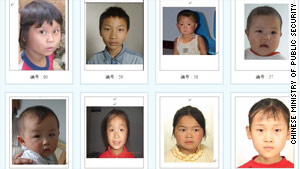 Chinese authorities are searching for the parents of 60 children whose photos appear on a government site.

Beijing, China (CNN) -- In some of the photos, the young children are wearing bibs and slight smiles can be seen on their chubby faces.

But these are not your normal baby pictures.

The Chinese government is trying to find the parents of these 60 homeless children, some of them so young that they had not yet developed the strength to hold their own heads up.

This week the Chinese Ministry of Public Security posted pictures of these rescued children on its Web site.

Many of them had similar stories. They were kidnapped, stolen or sold and somehow had been rescued by authorities.

Police tried to find their parents but could not find them through the national DNA database, state-run China Daily reported.

And for the first time, the Ministry of Public Security posted their pictures.

"Even if I can't find my boy's photo on the Web site today, it's a blessing for desperate parents like us who have nearly lost hope," Tang Weihua, a mother who lost her 5-year-old son in 1999, told China Daily this week.

About 30,000 to 60,000 children are reported missing every year, but it is hard to estimate how many are involved in child trafficking cases, the Ministry of Public Security told China Daily.

The traffickers bought 19 boys and 33 girls from impoverished rural families in Shanxi and Hebei provinces in the past two years, the state-run Xinhua news agency said.

The ring started crumbling after three men were arrested with a baby boy in their van, Xinhua said. The three suspects said they had bought the baby from a woman and her daughter in Hebei, according to Xinhua.

The women had sold 12 other babies to the men, and were arrested, Xinhua said.