Quake strikes deep in the eastern waters of Indonesia 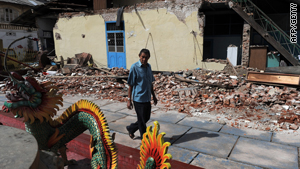 Saturday's quake is not predicted to cause the kind of damage that followed a similar strength eruption in Indonesia on September 30.
STORY HIGHLIGHTS
RELATED TOPICS

(CNN) -- A major earthquake vibrated deep in Indonesia's Banda Sea on Saturday night, but the Pacific Tsunami Warning Center predicted the quake would not be destructive.

"This earthquake is located too deep inside the Earth to generate a tsunami in the Indian Ocean," the center said.

The magnitude-seven quake reached a depth of 138.5 kilometers (86 miles), and was 232 kilometers (144 miles) north-northwest of Saumlaki in Indonesia's Tanimbar Islands, according to the U.S. Geological Survey.

On Friday night, an earthquake struck near the north coast of Papua, Indonesia, but no tsunami warning was issued, the head of the nation's meteorological agency said. Papua police reported one injury.