BUNDELKHAND, India (CNN) -- The cattle slowly drag the old-fashioned plow as a bone-thin farmer walks behind, encouraging them to move faster with a series of yelps. 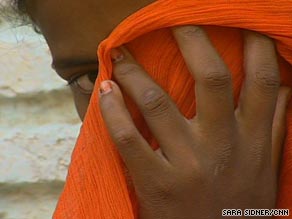 Drought, debt and desperation have pushed some farmers in rural India to sell their wives.

It is a scene from times of old, but still the way many farmers operate in rural India, where the harvest often determines feast or famine.

The region is called Bundelkhand, spanning the two northern Indian states of Uttar Pradesh and Madhya Pradesh. It is here that drought, debt and desperation have pushed people to extremes.

To survive the bad years, some farmers say they turn to the "Paisawalla" -- Hindi for the rich man who lends money. Farmers say the loans from these unofficial lenders usually come with very high interest.

When the interest mounts up, lenders demand payment. Some farmers work as bonded laborers for a lifetime to pay off their debts. Others here say because of years of little rain and bad harvests they are forced to give money lenders whatever they ask for.

Sometimes that includes their wives.

"It happens sometimes when somebody borrows money," says a farmer's wife who did not want to be identified. She should know, considering what police say she told them. She said a rich man bought her from her husband.

For 30 days she says the man forced her to live with him.

When her case drew public attention, she retracted her police report and her husband took her back.

Ranjana Kumari with India's Center for Social Research says the exploitation of women is common in the region. And, she says, there is little support for women in India who have the courage to file a case with authorities.

"Nobody's going to support or help them," Kumari says. "If a family decides not to help them, the system is already not so sensitized towards them, whether it is police, judiciary, whether the legal system. So the women themselves tend to withdraw these cases."

In another village, another story involving another farmer, and money lender.

"I sold my water engine and land and gave back his 30,000 rupees," the farmer says, describing his $600 loan payment.

The farmer, whom CNN is not identifying to protect his wife and children, says the lender then asked him to send his wife to help with chores while the lender's wife was sick. The farmer says he complied, and his children -- including his daughter -- went too.

But the mother never returned. The farmer says he believes she was stolen from him. The daughter says the lender sold her mother to another man.

State authorities say they have investigated the matter and found that the mother denies she was sold and has simply gone to live with a lover.

The daughter says that's not true, and claims that she and her father were told to keep quiet by some of the village leaders. During CNN's interview with the family, officials with the state magistrate's office barged into the farmer's home and began videotaping.

An Indian government report completed in 1998 says the region is prone to what it calls "atrocities," including the buying and selling of women.

However no one can say just how common these kinds of incidents are.

Social workers say this isn't just about poverty, but also an indication of the low social status of women in poverty-stricken areas such as Bundelkhand.

"Those women are very vulnerable to all kinds of physical and sexual exploitation." Kumari says. "Also there is much higher level of violence against women in that area."

The government and charities have been trying to help but the status of women and girls, often illiterate and seen as a financial burden, remains low. Nevertheless, attitudes are slowly beginning to change, Kumari says.

A farmer's wife in yet another village in the region said she was sold by her own parents 14 years ago.

She says she was 12 years old at the time her husband bought her. She never considered going to authorities because she says she had no where else to go. She accepted it as her destiny.

But now she has a daughter of her own and her perspective has changed.

Would she allow her daughter to be sold?

She looked up and shook her head firmly.

"No," she said, "I would not want this for her. Let her marry however she wants."