KABUL, Afghanistan (CNN) -- The top United Nations official in Afghanistan on Sunday defended himself against allegations that he has been wary to publicly address problems in the country's recent presidential election. 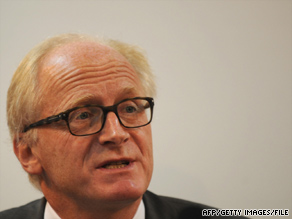 U.N. representative to Afghanistan Kai Eide is under fire by critics who say he did not address election fraud.

Clarifying his position at a news conference in Kabul on Sunday, Kai Eide admitted that the August 20 vote was marred by "widespread fraud."

Eide, the special representative of the secretary-general for the United Nations Assistance Mission in Afghanistan (UNAMA), called the allegations against him "personal attacks against me and my integrity" by his recently fired deputy, Peter Galbraith.

"Some of these allegations are based on private conversations whilst he was a guest in my home for two months," the Norwegian diplomat said, referring to Galbraith. "My view is that private discussions around the dinner table remain just that: private."

Eide defended his decisions to open as many polling stations as possible, despite security concerns; denied allegations that he refused to share information with the Afghan electoral officials; and rebuked allegations that he "accepted that the IEC (Independent Electoral Commission) dropped its safeguards in order to bring President (Hamid) Karzai above 50 percent."

"This is simply untrue," he said. Eide stressed that his main focus is moving forward Afghanistan's election process.

His comments come a week after Galbraith wrote a scathing op-ed in The Washington Post, accusing the United Nations of trying to cover up the real reason he was fired. Galbraith blamed Eide for "denying or playing down the fraud" in the election because "he was concerned that even discussing the fraud might inflame tensions in the country."

"But in my view, the fraud was a fact that the United Nations had to acknowledge or risk losing its credibility with the many Afghans who did not support President Hamid Karzai," Galbraith wrote.

Galbraith reportedly angered Karzai by calling for a complete recount after widespread allegations of election fraud and was abruptly recalled as Eide's deputy on September 30.

In his October 4 op-ed, Galbraith said the disagreement was not about "how" UNAMA would respond to electoral fraud, but "whether" it would respond.

The final results from the August 20 presidential election have yet to be certified because of an ongoing partial recount of suspected ballots. Karzai said Sunday that "the delay in the announcement of the elections results has negatively affected the country's security and economy."

Karzai called for the immediate release of election results "so the people of Afghanistan know their future and come out of uncertainty caused by the Western media and some elements in Western countries."

"The Afghans need to know whether they can determine their destiny or, despite elections, it is still foreigners who decide about it," Karzai said.

All About Afghanistan • Afghan Politics • Hamid Karzai • Elections and Voting