WASHINGTON (CNN) -- The battle Saturday in which eight U.S. troops were killed was so fierce that, at one point, U.S. forces had to fall back as attackers breached the perimeter of their base, a U.S. military official with knowledge of the latest intelligence reports on the incident said. 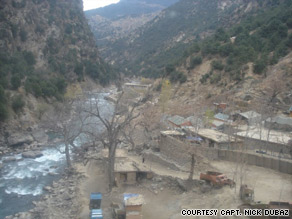 Forward Operating Base Keating, seen in 2007, is surrounded by tall ridge lines.

The new revelations about the battle that engulfed Forward Operating Base Keating in Kamdesh District are a further indication of how pinned down and outmanned the troops were at the remote outpost. The base, in an eastern Afghanistan valley, was surrounded by ridge lines where the insurgents were able to fire down at U.S. and Afghan troops.

The facility had been scheduled to be closed within days, CNN has learned. The closing is part of a wider effort by the top commander in Afghanistan, Gen. Stanley McChrystal, to cede remote outposts and consolidate troops in more populated areas to better protect Afghan civilians.

The United States now believes that about 200 insurgents -- mostly local fighters, with some Taliban organizers and leaders -- had been planning the attack for days, hiding mortars, rockets and heavy machine guns in the mountains. Sources said the Taliban may have been watching the troops make preparations to depart and launched their attack at a time of vulnerability.

The Taliban were able to use their higher positions to fire into the base, pinning down the troops. As the attack progressed, the troops were forced back when enemy fighters managed to breach the outer perimeter of the outpost, the source said.

That led to especially intense fighting that continued until the U.S. troops could again secure the area, several sources said.

The battle erupted about 5 a.m. Saturday and lasted 12 hours, with the most intense fighting going on for about seven hours.

The United States was able to get air support overhead within half an hour of the attacked troops' call for help, but a series of problems hindered mounting any sustained counterattack. The source said smoke from a fire lit by the insurgents obscured vision on the ground and in the air, and the narrowness of the valley hobbled any intense close air support.

Instead, Apache helicopters went in waves of two to four, firing at the Taliban fighters. But return fire frequently forced the helicopters back. One Apache was hit.

It took hours to evacuate the dead and wounded. During much of the fight, medical-evacuation helicopters had a hard time getting in because the landing zone was under attack. Even when the helicopters were able to land, some of the wounded resisting leaving while the battle raged.

Eventually, the tide turned for the U.S. and Afghan troops. More than 100 militants were killed, according to NATO's International Security Assistance Force.

Remains of four of the U.S. dead were flown back to Dover Air Force Base on Tuesday morning.